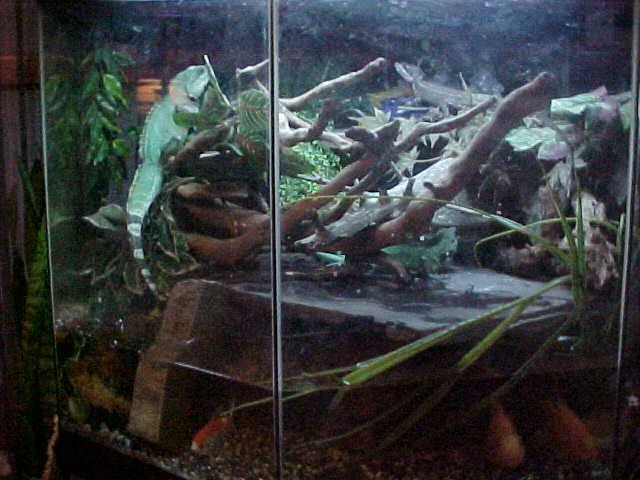 The female died at approximately 10-11 years of age.  I believe it was egg binding.   I chose to keep my water dragons on a full water base.  I love the water base because there were never dehydration issues and there were never shedding issues.   I do now advise all that if they maintain a female have, at minimum, an area that will alert you to laying behaviour so that you can remove her to a larger laying bin.*  I have also noted that females late in the egg carrying stages are poor climbers and spend a fair amount of time in the water.  Having a UVB source within this range at the time is incredibly important to avoid a calcium crash.  Her health will be vulnerable at this time.  Extra care should be taken.


*A small dirt area will work about 4 inches deep.  If you believe that you have an appropriate lay box, a minimum of 12 inches by 16 inches and if you see her repeatedly trying to find a location and then abondoning it, something is wrong with the set up that she is uncomfortable with.

B&E was the brunt of every error I made.  He and I had a rough journey. 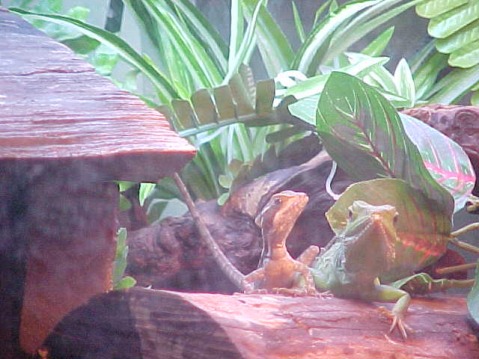 B&E and MITH and Bro were brought home to keep Girlfriend company after she lost her mate.  They went into the hexagon as soon as they were brought home as hatchlings. I don't think that MITH ever escaped, but B&E did so a half dozen times.  I used a canister filter on this tank and B&E would climb the tubing and wriggle his way out.  The first time it happened the cat got him.  He was likely about 3 inches snout to vent at the time.  The eye area was very damaged, bite marks throughout his torso. He was comatose the first 2 weeks. It took a full 4 to 5 weeks of feeding him by syringe, Soaking him in (I used sugar and water), I later used pedialyte, I used banana baby food.  Eventually he did begin to heal and perk up.  This is B after healing from the first attack.  This was him just before his second trauma.  The basilisk is no more than a few weeks old.

The brown basil above is also the smallest and began having trouble with her sibling within a few months.  The little brown is VERY skittish, B&E is her valium.  The Basilisks  have used B&E as their protector since day two here.  Sleeping with him.  Basking on top of him. (I don't subscribe to the mindset that this is always a negative behaviour.  It can be.  I have seen occasions of it being so.  Other times it is that they feel safer as a pair.  Girlfriend was of the same mind set as B&E and has gotten along fabulously with room mates. 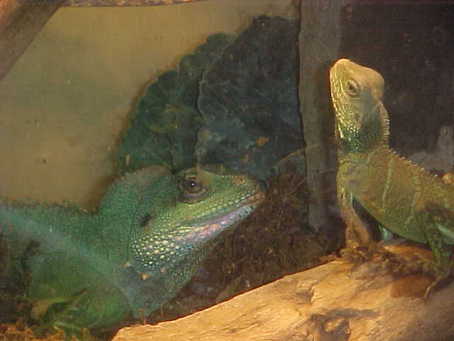 This is B and his brother.  B was close to 2 years of age?  Over 2?  Look at the development of his brother.  I think the larger dragon is Bro, not MITH, who grew to be just slightly smaller than the dominant male.    B is growing now.  Please note his colourting in comparison to the healthy male.  (This was a comparison photo only.  B was not kept within sight of the other dragons.)  B and I are still struggling.
It is at this time that I will discover electrolytes.  I use ExoTerra's brand.  I don't recommend or "sell" products.  It is the product I have been using for 12 years.  B&E is living with the other water dragons and coping quite well at 2.5 to 3 years.  Before the spring the two other males were to turn 3 and sexually mature, they moved on to new homes. 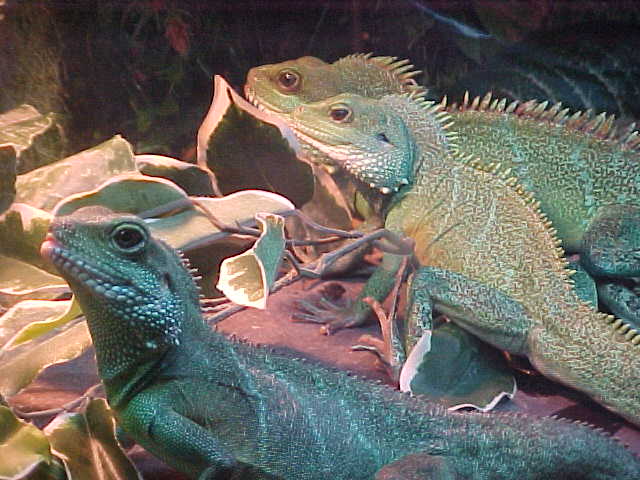 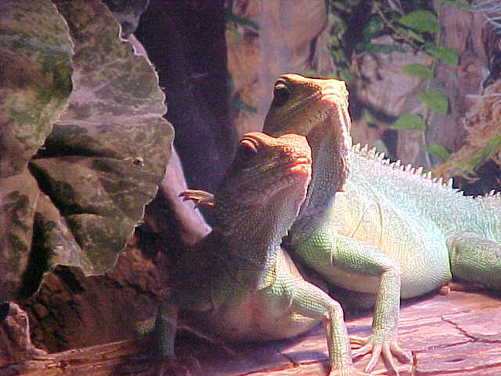 B around 3.5, Girlfriend is 6.5.  B&E has been the most gentle and cordial lizard I have ever seen.  My other males were pretty good as well and wouldn't argue with another species over territory and have shared space quite well.  Unless the other species was the aggressor and then they will behave defensively.  These were the two that lived out their lives here. 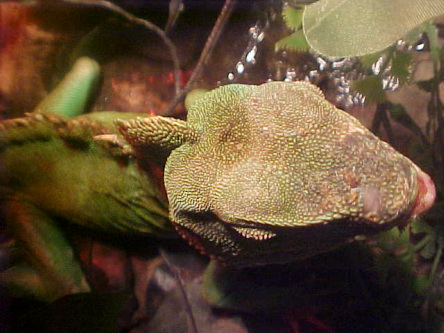 Health wise B&E needs a close eye kept on him.  He does tend to go into unexpected spirals once or twice a year.  At which time he needs a week or two of extra care.  He doesn't eat many crickets, he has a difficult time getting them.  There was some damage to the eye and he has never been coordinated enough to get very many. B&E does like the red wigglers and earth worms I bring him in, as well as snails and isopods from the yard.  I try to use the earthworms to balance out the fats of the other feeders.

Again, I will mention that none of my buddies get anything larger to eat than an earthworm.  But I have had some that liked small fish, my little african clawed frogs were eaten within 2 years and snails of every kind.  An Apple or other variety of snail is a great choice to have in their water source.  Breeding snails are a great source of providing a natural hunting experience.  The shell is high in calcium.  (I have never been able to keep snails in the hexagon or the turtle pond.)  They are a favoured food.  Putting in anoles or frogs would not be advisable.  ﻿
B&E in his later years.  B&E made it to 12 years of age.  The leg attrophed though the foot remained working.  His vision was always impaired and his diet was mostly in the worm family. 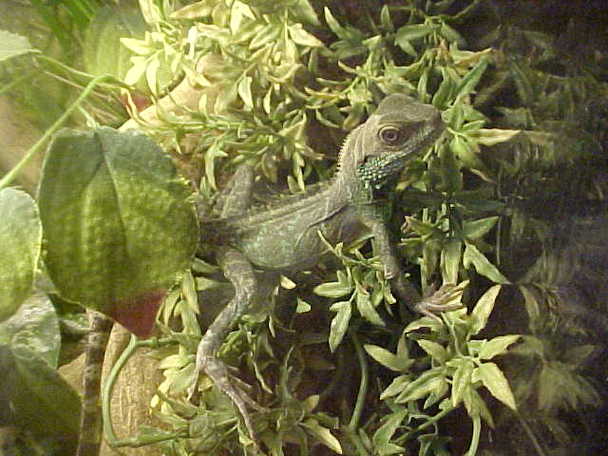 Dust at 16 months old a week after arriving here. 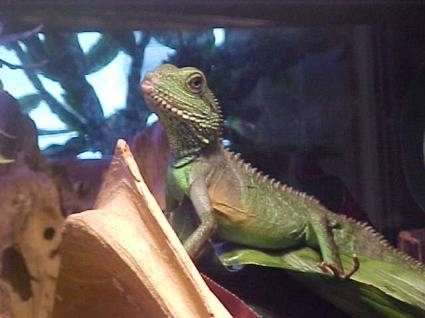 Dust may not be appreciating his name...as he is developing his male features the last few weeks.  He is no more than 5.5 inches in length, snout to tail and at minimum 1.5 years.  Dust has recently joined the crew in the 150 gallon tank and is settling nicely.  But the prominence of the features developing so quickly also says to me that he is aware that there are other water dragons in the room.  I will really make an effort to block his view of both the hexagon and the second area.   This little water dragon was kept in an 12" exo terra for the first 15 months of his life.  The cage was very bare and he had a water base.  Food was very scarce as well.  He was being offered super worms that were to large for him. I made the mistake of thinking this was a permanent size for him and kept him there for another couple of months.  Until I noted him trying to grow.

The view of the other water dragons (girlfriend and B&E) was very stressful for this dragon and caused him to continually glass surf.  Additionally both the basilisks were within view and had the same effect.  I tried adding more cover between the tanks but this did not help.  He was causing himself damage and I chose to rehome him at that time.   At over 2 years of age below. 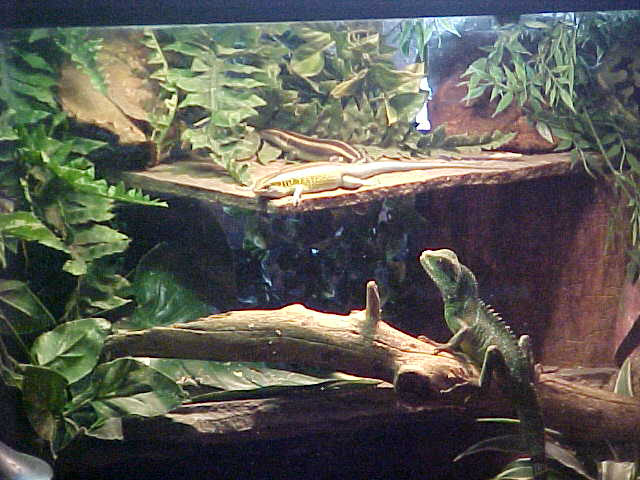 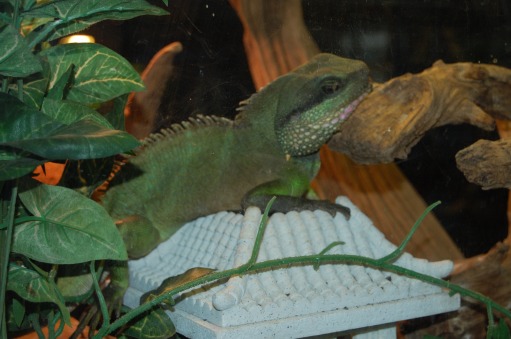 R & R came here at an unknown age.  He had a very good length and someone at some time had taken good care of him.  He came here through a kijiji ad, delivered with aquarium for $35.00 from someone moving the next day.  I had never been so heartbroken over the condition of an animal.  He came in a 35 gallon aquarium.  Wood chip base.  A tiny water bowl and dry cat food.  He was a fully grown male.  I have never seen such an advanced stage of starvation before or since.  Nor had I ever seen a more advanced case of damage to the mouth and snout as he had.   This was shortly before we found a beautiful and dedicated home for him a year and a half after he arrived.  Read more on his health. 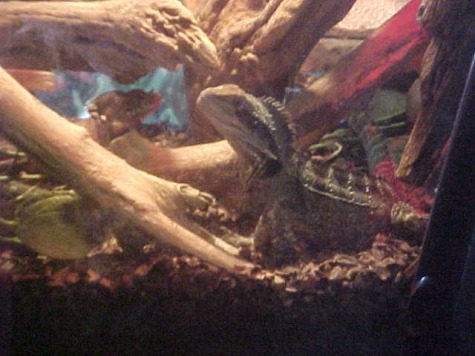 A word or two about my Australian Water Dragon ~ My Australian was brought home at about 3-4 months old with a tail already broken.  He has been a very healthy guy who was moved out of the hexagon before 2 years of age.  The conditions of the chinese water dragon cage grew a big healthy Australian. This guy is FAT.  He is very food aggressive.  Became aggressive with cage mates as he matured and neared the 2 year mark.  Not nearly as laid back as the Asians.   Eventually, I tried to make the pond area into a free roaming area.  This had some success for the water dragon but not for another escaped lizard.  He swallowed a berber skink almost whole.  Instead of standing there dazed and horrified I should have snatched him up and found a way to induce a regurgitation.   I never looked at him the same way again.  He was rehomed shortly afterward.