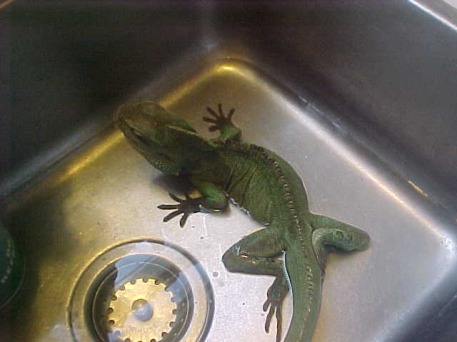 Note B's foreleg colour below the knee, very darkened, the colour around the eye is also dark, eyes sunken, dull skin colouring.  Retained shed on his spikes and coming into another shed.  All of these are visual signs that say B is not well.  His weight another.  ﻿

B&E (Break and Exit) came here early and is my eldest from hatchling.  He has taken the brunt of many of my errors.  His attempts at escaping ending in tragic ways.  We purchased 3.  All 3 ~ males.  B was intimidated by the other 2 almost immediately but I did not realize it.   He ate.  He just stayed in the shadows 90% of his time.  His first attempt at a break out nearly led to his demise.  He and the cat met.  He lost.  I was 5 weeks of syringe feeding.  And again, he lost size to his siblings.  At 9 months B&E met the cat for a second time.  But he also met the Staffordshire on the same trip.  Again, syringe fed for 3 to 4 weeks with electrolytes.  The results of these meetings included the loss of 70 percent of his tail. A rear leg that does not work and remains in a curled position, (right rear), though he has some use of the foot, a severely damaged eye resulting in a lack of mobility and agility.    It usually lasts a week or two and we can pull it back together.  Three or four days of hand feeding and electrolytes followed by a few days of good eating. 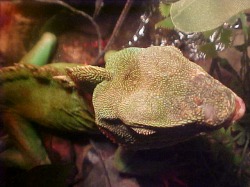 B&E is currently living alone.  His basilisk was moved out due to an escape route I can't close in the hexagon.  (Could that be the reason they were moved in the first place?)  Neither were happy about the separation.  B also napped for the winter, up and down every few days.   But his look and weight were good.  His appetite was decent during the time.  In the past month we have had a problem developing.  His appetite decreasing but still eating every 2 to 3 days to present.  And for the past 3 weeks the facial tissue is deteriorating.  This is a new one for us. 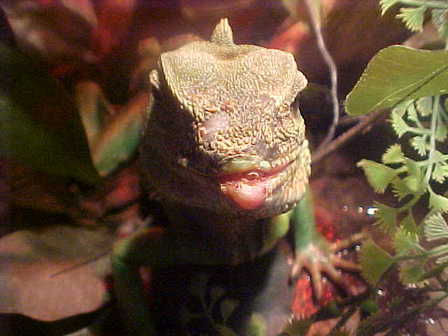 Although I have been using the compact UVB's for the past 3 years without seeing any difficulties I believe there is a connection in this situation.  I turned B's heat up a notch with a higher powered infrared, provided more solitude and turned off the coil UVB for a couple of days.   His behaviour improved and I turned the UVB back on daily for 3 days......B's behaviour again indicated I had been too optimistc and he went back into hiding.  I repeated the steps again and he improved.

I have taken the coil UVB out and replaced with a tube fixture now.

B is still in a halfway situation.  Eating but not as much as he can.  Drinking.  Feces well formed.  Urates looking Ok.  But his skin is still very dull.  Lip is looking less swollen.  Eyes are sunken and dark.  Some spikes look like they have retained shed on them but toes are good.

I will update this in April and see where our progress stands.  Hopefully we will have made some.

The first sets of pictures are from March 19 and 20.  The pictures directly above taken on the 23rd of March.  There are only a few things I have done.  Replaced the compact UVB with the tube.  B has had 2 warm baths with chamomile tea added to the water.  (2 cups to a gallon?)  Water with electrolytes added, eye dropper fed x 2 times with electrolytes.  Polysporin to his facial area.  I have not moved him to a different environment.  We have worked off a couple of the spikes with old shed.

We have B & E in better health now.  I did not have to do anything complicated.  Three days of soaking and electrolites with water, a light coating of polysporin to his face daily for a week, which was then reduced to once every three days of doing the same.  He is ready to face the world again.  In the photo above you can see the difference in the size of the damaged leg to the healthy one.  There is still a layer of extra skin on his back spikes we are working on with petroleum jelly.

With great appreciation to the many helping to build this site.
HOME