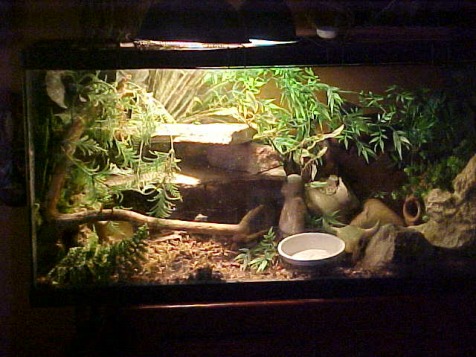 The smaller of the 2 Star Agama resides with 2 Leopard Geckos in this 30 by 12 by 18 inch.  He is not capable of living with the other Agama.  After his health returned I did attempt to put them back in together and the smaller immediately began to lose ground.  Within 3 days you could see him retreating.  While he was a little alarmed at the sight of the Leopards it didn't take him long to settle with them, a few days. 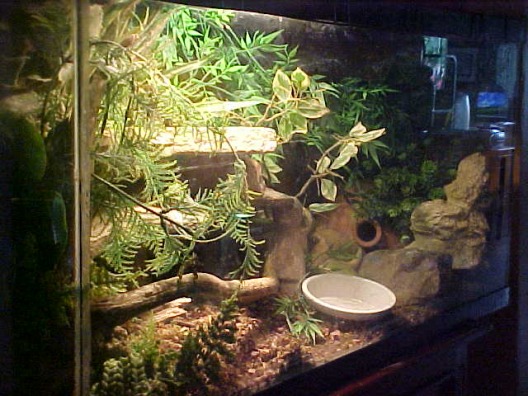 There is a 100 watt heat bulb above the top ledge which also reflects the heat back up rather than deeper into the tank. The temperature on the ledge is 102 F and the humidity 21%.  The floor space below the ledge runs  92 F.    While at the other end of the tank, where the leopards spend their days there is a under tank heater and ground temperature is 86 F.  The humidity 40 to 45%,   though I do imagine it is warmer in their pottery home where the 2 have bunked together.  There are other choices.  The pot has followed them from home to home here and has always been their personal choice.  The end is surrounded by a couple of rocks and the substrate there is moss to absorb some humidity for their hide.    For night heat the underpad is the only heat.

The substrate currently is a garden product of coconut fiber.  I use this as a very dry substrate base.  It is very lightweight.  Feces drop beneath it to the bottom very easily where there is a thin layer of sand as well.  This product molds very easily with water spillage.  This will be the beginning of a natural substate to which I will add leaves, ficus leaves, grass cuttings and more of the coconut fiber.

This is one of the few tanks that doesn't have running water. 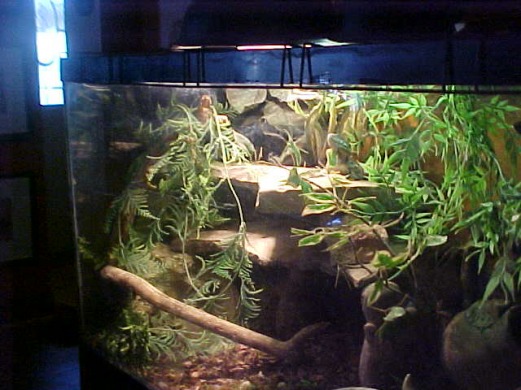 While both Leopards come out to eat when the dish is filled, they only stay at the food dish for about 15 minutes and are never guilty of emptying the bowl.  The agama patiently awaits his turn.  The agama is a very active little guy.  Suns at the top level but bounces around during the day.  They do love to dig and pounce on any movement beneath the surface of the substate.  They are quite good at catching their own prey when needed. 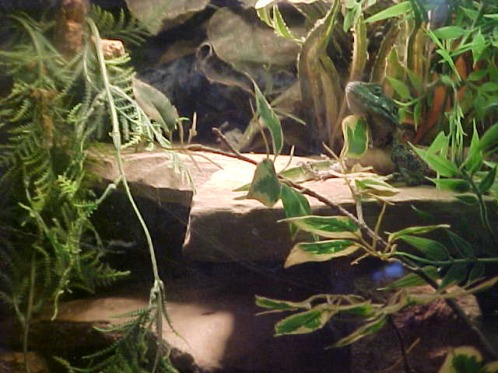 The female, on the left, is just gaining back some of the lost weight from her last round of egg laying.  Her 3rd clutch of the year.  Leopard geckos are fastidious in their housekeeping.  They eat their sheds and will choose one location in the environment to deficate but are not particularly active during the day.  Although, the male will be out and about quite often.  The female only comes out to eat.  The leopards are over 10 years of age now and she is still laying consistantly. 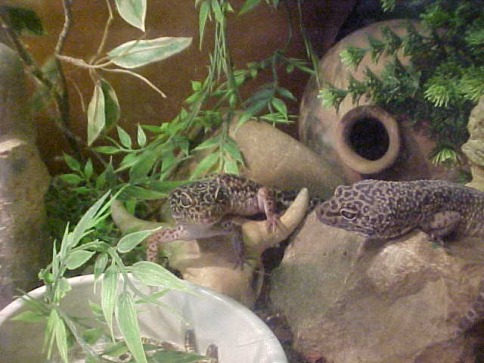 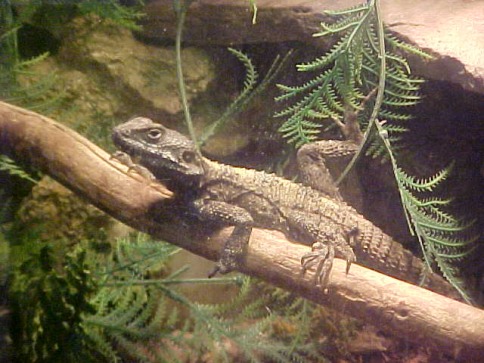 This little one is missing all but one toe on his front right foot.  It likely happened as a hatchling.  Both of these Star Agamas are male.  Without separating the pair the smaller would never have thrived.  If you have 2 hatchlings watch carefully that the growth rate is comparable and that one is not slowly losing ground to the more dominant animal.  Signs of bullying can include dominance with food, head bobbing, chasing,  arm waving, poking, smaller not basking or near a great basking spot, hiding.   All are signs that you have a problem to solve.

The Stars are somewhat flighty as many of the smaller agamas are.  The smaller is settling with more ease than the larger.  Although, not impossible to catch they can be quick.  I would give it a 50/50 chance of your finding them if one escapes.  I found the one...trying to get into another tank.    I am growing quite fond of them and enjoy watching their antics. 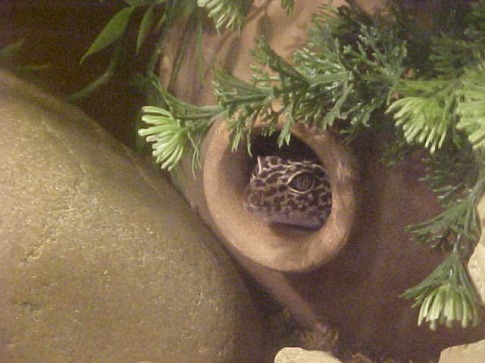