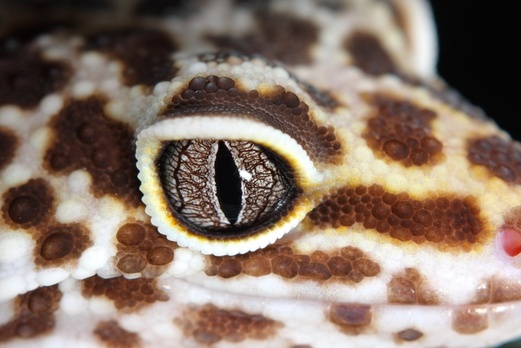 Andy Tedder explores a subject where much has been learnt over recent years, and one that is of increasing significance to reptile keepers, especially given the widespread popularity of leopard geckos today.

As the experienced amongst us (and by ‘experienced’, I mean older keepers!) will agree, our understanding of the care requirements of reptiles has progressed faster in the last 15 years than any time in the past. There is a good reason for this - namely, a concerted effort by both the herpetology and herpetoculture communities to gain better insights into the biology and physiology of this group of animals.

These advances have not been easy to achieve however, and nor has it always been simple to persuade keepers to accept and implement the resulting findings in the first instance. A current example of this is the use of lighting, specifically UVB lighting, for crepuscular and nocturnal lizards. The positive benefits of UVB exposureAs most reptile keepers will know, UVB radiation (290–315 nm), either via unfiltered natural sunlight or artificial vivarium lighting, causes pro-vitamin D (7-dehydrocholesterol) in the animal’s skin to form pre-vitamin D. This is then thermally isomerised into vitamin D₃ D3 [Holick et al., 1995]. After undergoing hydroxylation in the liver, it becomes 25-hydroxyvitamin D₃ [Holick and Clark, 1978], which is carried by the blood to the kidneys, where it is converted to its hormonally-active form known as 1,25 dihydroxyvitamin D or calcitriol [Holick et al., 1971].

This hormone’s main function is to facilitate uptake of calcium from the gut of the animal. The importance of this chemical pathway should not be under-estimated. A failure to accumulate adequate active vitamin D₃ in the blood stream means that the body’s largest calcium reserve - the skeletal system - will otherwise become weakened. If not remedied, this can then soon lead to a calcium deficiency, generally described as metabolic bone disease (MBD).

For this reason, it is not an over-statement to suggest that calcium metabolism is one of the most important concerns for all reptile keepers, as far as their animals are concerned. Considering the importance of calcium metabolism to the overall health and well-being of reptiles therefore, it is somewhat surprising that UVB light is still often overlooked by many keepers of nocturnal species.

There are doubtless various reasons for this, although I am convinced the benefits that this type of supplementation bring far out-weigh any extra monetary costs. Perhaps the main argument advanced for not using a UVB source is that nocturnal lizards would not be exposed to sunlight for any length of time in the wild, and anyway, their diet is being supplemented with active vitamin D₃.

For me, however, having studied the evidence, it is clear that the use of lighting is beneficial. Many keepers may instead choose a vitamin supplement with a source of active vitamin D₃. Typical supplementation regimens will usually include two or three days of multivitamin use (which includes D₃) and then the addition of pure calcium or a multivitamin supplementation with each feed on the remaining days.
Does it work ?Anecdotal evidence suggests that using a routine as set out above can be effective. Many experienced keepers and professionals will tell you that this type of method has consistently worked for them, and indeed, in many cases, it would appear that it is possible to achieve correct calcium metabolism in this way. However, there are also some potential problems with it:-

•    The vitamin D₃ source in many commercial supplements is subject to decay (as are all the components), with the rate of decay being unknown. This means that the supplement you purchase ‘new’ in the reptile shop could already have become less potent than was initially intended. Unfortunately, this means that without altering your previously effective supplementation routine, you might possibly be unknowingly under supplementing your animals.

•    Designing a supplementation regimen which is appropriate for your animal and provides optimal vitamin D₃ is very difficult, having noted the potential problems if this is not achieved. While it is important that both vitamin D₃ and calcium are not under-supplemented, it is also equally vital that they are not over-supplemented.

•    Gauging the amount of vitamin D₃ that your animal is actually receiving without blood testing is impossible. This means that incorrect supplementation may easily go un-noticed, and can potentially lead to problems. This difficulty can also be amplified by a variation in D₃ and calcium requirements within a species. For example, it is conceivable that females during ovulation and rapidly-growing juveniles require higher levels of D₃ than adult males.

Bearing these problems in mind, it becomes very difficult to see how a general oral supplementation regimen can suit all individuals within a species, let alone all species within a collection.

Calcium metabolism in both adult and juvenile lizards is not the only reason that UVB is important for captive lizards. Many studies have demonstrated a link between vitamin D₃ and captive hatching rates in reptiles. Over many years, both professional organisations concerned with conservation and private keepers have observed a problem with the failure of their captive-produced eggs to hatch at term [Zwart et al., 1992; Ferguson et al., 1996].

Seemingly viable eggs are produced by apparently healthy captive-raised adults, and incubate to full term but then fail to hatch. On further inspection, the fully developed, dead embryos appear normal but have poorly-mineralized skeletons. This problem has also been documented in various non-reptilian species and has been verified experimentally to be a the result of a deficiency of vitamin D in the egg yolk caused by hypovitaminosis D (a lack of this vitamin) in the mother [Narbaitz and Tsang, 1989; Packard and Clark, 1996].  This problem can be corrected in many species by providing sufficient UVB lighting for the adult female prior to egg-laying [Ferguson et al., 1996; Ferguson et al., 2002].

Is a UVB source really the answer?

We frequently hear that nocturnal species do not naturally expose themselves to UVB light for prolonged periods in the wild, and this is likely to be true. As a result however, the skin of nocturnal reptiles allows for greater conversion of pro-vitamin D to photoproducts when exposed to UVB from a lamp. This means that nocturnal species can utilize UVB in a much shorter space of time than their diurnal counterparts, whose reduced skin efficiency in terms of vitamin D photobiosynthesis probably reflects their increased exposure to sunlight. Basically, they don’t need to be as efficient in utilising UVB, as they are active throughout the period when UVB is most readily available - during the day.

This evolutionary adaptation allows nocturnal lizards to utilize UVB radiation in very short periods of time, and has been demonstrated experimentally in recent studies on diurnal species. These have concluded that a short period of UVB exposure (two hours) enables adequate concentrations of plasma vitamin D₃ metabolites to be maintained. On the other hand, it has also been shown conclusively that oral supplementation of D₃ does not allow this to happen [Oonincx et al. 2010; Fraser, 1983]. Unfortunately, what this study suggests is that although many keepers may not be experiencing problems when using oral supplements, they may nevertheless still not be fulfilling their reptiles’ requirements adequately.

What does this mean for your nocturnal species? Well, while it is clear that there are plenty of examples where current supplementation regimens appear to be working, and according to many keepers, working well. I think it is also fair to say, however, that there are also situations where it is not working. The benefits to using UVB for short periods in each 24 hour cycle are also great. Allowing your animal to regulate its own vitamin D₃ and calcium metabolism may remove some of the guesswork associated with this type of supplementation, and reduce the number of cases of MBD.

It is also important to note at this point that changing the supplementation routine will be  necessary, when you introduce a UVB source. This change would ideally involve a switch to a product which does not contain active vitamin D₃, but one that still meets the animal’s calcium and micro-nutrient requirements in general, incorporating other essential vitamins and minerals for example.
Behavioural impact of UVABeneficial lighting for reptiles is not restricted to UVB, and it can be important to allow for more natural behaviour and increase breeding success. Indeed, studies on the effects of UVA radiation have been shown to have a profound impact on certain behavioural traits in reptiles. In particular, UVA is responsible for an increase in behavioural traits associated with reproduction or courtship, along with social behaviour in certain species and territorial behaviour in many others. I believe that these traits are very important for many species, and lack of UVA light may explain why their behaviour may differ, certainly when compared with their wild counterparts.

In the past, the idea of UV lighting for nocturnal reptiles appeared something of a contentious issue, with keepers on both sides of the debate proposing alternative arguments. The evidence presented here gives firm evidence that both UVA and UVB may have a profound positive impact on the health, behaviour and reproductive success of nocturnal reptiles.

As with all changes in husbandry practices however, this evidence may not be universally accepted at present. Nevertheless, all keepers should strive to provide the best conditions possible for their animals, and in the case of vitamin D₃/ calcium metabolism, it would appear that oral supplementation may not be the best answer. In my experience, the positive benefits of using a UVA and UVB source in a vivarium housing nocturnal species far out-weigh the costs associated with using this type of lighting.R

Holick MF, Schnoes HK, Deluca HF. 1971. Identification of 1,25-Dihydroxycholecalciferol, a Form of Vitamin-D3 Metabolically Active in Intestine. Proceedings of the National Academy of Sciences of the United States of America 68(4): 803-7.

Holick MF, Tian XQ, Allen M. 1995. Evolutionary Importance for the Membrane Enhancement of the Production of Vitamin-D3 in the Skin of Poikilothermic Animals. Proceedings of the National Academy of Sciences of the United States of America 92(8): 3124-3126.

Narbaitz R, Tsang CP. 1989. Vitamin D Deficiency in the Chick Embryo: Effects on Prehatching Motility and on the Growth and Differentiation of Bones, Muscles and Parathyroid Glands. Calcif Tissue Int. 44: 348-355.

Andy Tedder is an enthusiastic breeder of geckos, with a keen interest in their genetics.  You can find his web site at www.glasgowgecko.co.uk