KNOW WHAT YOU ARE GETTING INTO BEFORE BUYING THAT 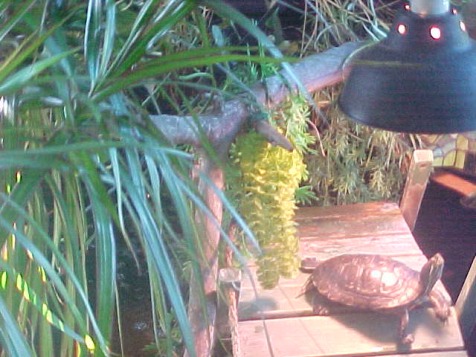 Male RES (commonly known as) on the pond bridge.  The bridge itself has a 14 inch span...this guy still has 4 more years of growing to do.

The Red Eared Slider (RES) is one of three subspeicies in the pond slider family.Sliders, especially the red-eared slider were once the most popular turtle item in the pet trade, and an estimated 5-10 million turtles were exported around the world. (This is why sliders are referred to as the "dime store turtle"). Because of unsanitary conditions and a lack of knowledge on turtle care by the pet store owners and their purchasers, few survived for long in captivity. Soon turtle farms were established in the southeastern United States (mostly in Louisiana and Mississippi) in response to declining wild stocks. By 1960 more than 150 farms were operating. Unfortunately, these farms were not self sufficient and over 9,000 adults were taken from the wild each year, seriously depleting natural populations in some areas. (In recent years, these same farms are also responsible for trapping adult sliders to export as food to Asia (Smither 1998)). In 1975 the U.S. Food and Drug Administration banned the sale of turtles under "four inches" carapace length in the United States and Canada because they transmitted the disease salmonellosis caused by the bacteria Salmonella (Ernst, Lovich and Barbour 1994). Salmonellosis is a serious disease of the digestive tract that infected several thousand children and caused a number of deaths that have been attributed to their handling of turtles (Vosjoli 1992).


The turtle pet trade industry has continued to export large number of hatchlings and adults to other countries using various techniques to limit Salmonella. The use of the antibiotic Gentamicin has led to the development of many antibiotic-resistant strains. An estimated three to four million turtles continued to be exported, thus providing an important potential route for global dissemination of human salmonellosis (Ernst, Lovich and Barbour 1994). 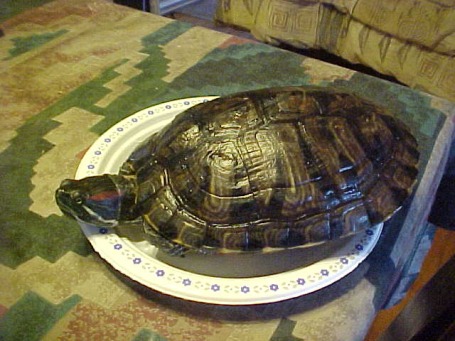 This is my female RES on a full sized chinette dinner plate.  She is 6 yrs of age with 4 more growing years ahead of her.   She is currently 9 inches in length and 7 in width.

Red-eared sliders inhabit most freshwater systems such as lakes, streams, swamps, ponds and rivers. They prefer the quiet waters of marshes, sluggish rivers and ponds that have soft bottoms with numerous basking sites and an abundance of aquatic vegetation. They are faithful to home ranges, leaving only to search for mates, nest and hibernate. Even if the waterways in their home ranges begin to evaporate during the summer, the sliders remain. Only after the waterway is completely dry and conditions become unbearable, will they migrate to better areas (Ernst, Lovich and Barbour 1994).

Humans are the greatest enemy of red-eared sliders. Every year untold numbers of juvenile and adult turtles are shot while basking, being beheaded after being hooked by uninformed fisherman, crushed as they wander across highways, sacrificed for researching and teaching, lost to the pet and food industries, or dying from habitat destruction and pollution (Ernst, Lovich and Barbour 1994).If you find yourself in possession of a red-eared slider, and feel that you can no longer care for it properly, please do not release your captive turtle into the wild. Not only is this illegal, but it can be harmful to your domestic turtle who is probably accustomed to being fed store bought turtle food. Also by releasing your red-eared slider, your turtle may pass parasites onto the surrounding turtle population. In addition, your turtle may mate with another turtle of its kind, establish a colony and push out the native species living in the area. In short, releasing your domestic turtle could have a serious effect on the environment, drastically impacting conservation efforts. The following two websites include organizations that will accept red-eared sliders for adoption and post red-eared sliders that can be adopted: 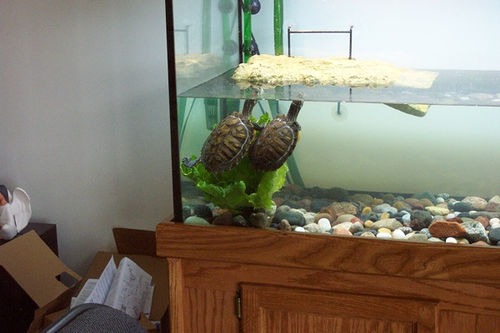 Most people first encounter red-eared sliders as small, green turtles with bright-red or orange patches on the sides of their head.RES are medium sized turtles reaching 8 inches for males and 13/14 inches for females, though larger sizes have been reported. Many people believe that they are some sort of "dwarf" turtles and that they will stay small all their life. This is one of the major problems beacuse many RES get abbandoned when they grow too big to fit the all-too-small containers they are usually housed in. Another common mistake is the one about the life-span of RES. While many believe that their normal life-span is 1 year, it is known that they easily can reach the age of 40 years.
As they grow, RES usually get darker but don't loose the attractive marks on the head and body. Their shell can become more or less rough, or bumpy, which depends on the genotype of the turtle, its growth-rate and (less) on the living conditions of the animal.
The difference between male and female turtles becomes visible only after one year or more. The most striking characteristic of male turtles are long claws on the front paws and a long, thick tail. Female turtles tend to grow larger then males 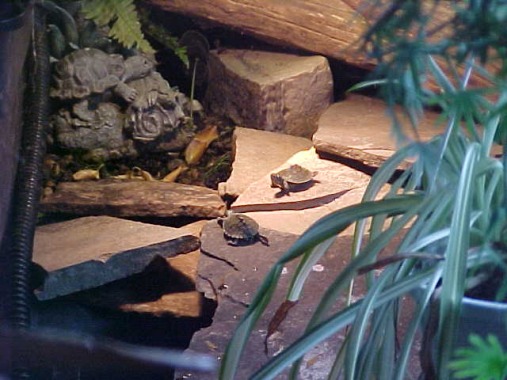 Loonie sized........doesn't stay that way.  P.S. these are the Mississippis but loonie sized!

You can enrich this basic setup by adding gravel to the bottom of the tank. It is a nice detail and it also provides a "playground" for the turtles. They adore digging and rumaging it. The problem with the substrate is that it retains the waste that falls on the bottom of the tank. Hovever, a good filtration system will take care of that...Fake plants will also add to the look of the aquarium, but they must be made from robust and non-toxic materials.

A dry basking area is essential to the well-being of RES. Basking is one of their main activities, and they must get dry from time to time to prevent many ill states like fungal infections, shell rot and eye infections. The basking area can be made in a variety of ways. The goal is to obtain a dry and easy accessible "land" but retain enough swimming place as well. I solved this problem by placing a smaller aquarium on its side in the tank and placing few rocks on top of it. In this way I didn't loose any precious space. Another common way is to glue a glass "shelf" on the wall of the tank.


Above the basking area you must place a basking light. It can be a common bulb or a broad-spectrum one. A broad-spectrum light is needed for the production of vitamin D which is essential for the metabolism of bones and shell. But, the problem of hypovitaminosis can be also circumvented by adding vitamin supplements in the food of the turtle. If you use a broad-spectrum bulb don't forget that they don't produce enough heat which means that a common, heat source is still needed. Turtles will hardly enjoy basking with broad-spectrum bulbs as the only source of light. Also, it is very important to respect the natural alternation of day-night periods and don't use any light during the night. 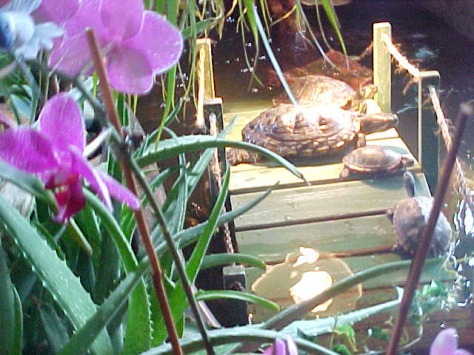 Remember I stated that the bridge was 14" span...this slider isn't leaving many inches...this was about a 6 or 7 year old slider.

Turtles, like other living beings can suffer from a number of deseases.

1. Shell-softening (Metabolic bone disease) is one of the most usual disorders that affect turtles in captivity. It is a consequence of calcium deficiency which can happen for several reasons. Calcium is the building element of all hard tissues in the body and its deficiency leads to severe disorders of bone formation and maintainance. The absorption of calcium in the intestines is mediated by vitamin D3 and the production of D3 in the body is dependent of the UV rays which are present in the sunlight. Glass absorbs UV-rays so turtles in captivity are unable to synthesize their own vitamin D3 which is essential for the metabolism of bones and connective tissue.
Vitamin D3 deficiency is the most usual cause of shell-softening among captive turtles but it also can happen for other reasons. Low calcium diet or some plants like spinach can cause MBD too.
The symptoms of shell softening is the general softening of the shell and bones underneath. White, spongy areas can also appear on the shell (and these white patches are especially typical when hatchlings are affected). The animal will often be apathetic, refuse food and be prone to infections. Turtles with shell-softening endure great pain.
This condition is extremely severe and must be cured as soon as possible. The first aid consist of administering vitamin supplements and calcium in increased doses and exposing the animal to direct sunlight. The best calcium supplement is cuttlebone. Scrape off the hard backing and put it in the water.
The housing should be adapted to meet the needs of the sick animal. The water should be warm and shallow and the basking spot must be easily accessed.
A long term answer to the problem of shell-softening can be achieved by placing a full-spectrum light above the basking area. These bulbs can be bought in most pet-shops and are fairly expensive. If you can't afford one, administer vitamin supplements regularly and full sunlight time weekly and this will help solve the problem.

2. Eye-problems are not rare among reptiles. Poor quality of the water, lack of vitamins and improper care can easily lead to blindness. Eye infections can be easily treated but many owners do not pay enough attention and the result is the permanent blindness of the animal. An important thing to remember about eye problems is that they are often a sign that something else is wrong. They can be the first symptom of deseases like shell-softening or other infections which are characterized by a drop in the immunity system. Fighting eye infections is rather simple. The eyes should be treated with diluted boric acid (60/40) or sulfamethiazine. The water in the tank must be kept clean to avoid new infections.

3. RES are particularly susceptible to respiratory infections which can be related to the fact that they spend most of their time in the water. They are usually caused by keeping turtles in drafty spaces which are not properly heated. Also, the majority of respiratory infections are contageous and they can easily spread from one animal to another. The symptoms of such infections include runny noses, lopside swimming, wheezing, lethargy and loss of appetite. The therapy is quite simple. The turtle should be removed from the tank and placed in a clean tank with warm water. The room must be warm and without drafts. If the condition of the turtle doesn't improve, a veterinarian help is needed. He or she will prescribe antibiotic drugs that will eradicate the infection.

4. Fungal infections usually manifest themselves as grey or white cotton-like layers on slider's shell and skin. They can develop as a consequence of poor husbandry (dirty water, lack of basking or inadequate feeding) or/and in addition to other ailments. Fortunately, if recognized in time, fungal infections are readily curable. The usual therapy consists of salty baths few times a day. 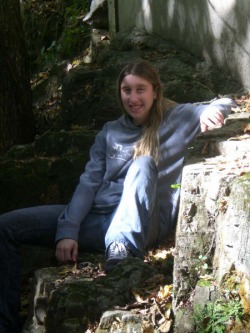 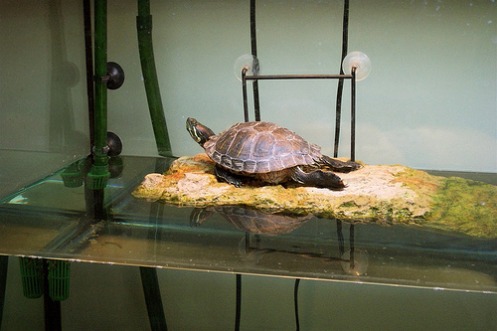 Nicole is the owner of 3 Red Ears and worked in a pet store.

Thank you Nicole, for an excellent article  on Sliders.  We appreciate your time and effort.    ~ Pat