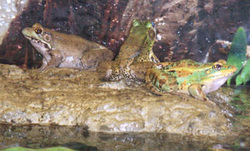 Hello, Frank Indiviglio here.  Charles Darwin said of the lowly earthworm (Lumbricus terrestris): “It may be doubted that there are many other animals which have played so important a part in the history of the world as these lowly organized creatures”….this in deference to the fact thatthe 50,000 earthworms that may populate each quarter acre of farmland aerate and fertilize 18 tons of soil annually!

More to the point here, earthworms come close to being a complete nutritional package for many amphibians and certain reptiles.  Although based largely upon experience, this statement is also borne out by research…one study showed that earthworms provide adequate levels of several important nutrients, including Vitamins E and A, for many vertebrate species.

A Valuable Food for Many Pets

I have raised spotted and red salamanders and green, bronze and leopard frogs from metamorphosis through adulthood on an earthworm-only diet, and use them for 50-75% of the diets of many other amphibians.  Although refused by many lizards (but relished by American and European glass lizards), earthworms are taken by most predatory reptiles.

I’ve also had excellent results when using earthworms as the main food for bullheads and other fishes and for certain tarantulas and centipedes. They may also be fed to marine animals, but expire and decay rapidly in salt water.

Earthworms may be broken into small pieces to feed tiny pets.  However, a whole, small earthworm is more nutritionally complete than is a piece of a larger worm. Uneaten earthworms will remain alive in aerated freshwater for up to eight hours, but decompose rapidly upon death.

Earthworms may be purchased from bait stores and commercial breeders or collected, and store well in damp sphagnum moss under refrigeration.

Earthworms breed readily in captivity but, being intolerant of temperatures much above 70F (50-65 F is ideal), are best raised in a cool basement.  They can be easily cultured in a screen-covered garbage can filled with alternating layers of moist soil and dead leaves.  Ample air flow is important, but they will wander at night if left uncovered.

Earthworms can be raised on a variety of diets.  I use dead leaves, tropical fish food flakes, oatmeal and cornmeal, into which is mixed a powdered calcium supplement.  Placing the food on the surface, beneath a layer of damp burlap, simplifies collection.

Earthworms consume large amounts of soil while feeding, and therefore their nutritional profile will vary with collection location.  If you buy eathworms for immediate use, try to feed the worms for a day or so as described above before offering them to your pets.

In the course of tunneling through the ground, earthworms may ingest pesticides and other harmful substances.  I’ve not had any problems with wild-caught worms, but a diet of earthworms contaminated with organochlorine pesticides has tentatively been linked to the disappearance of striped skunks on Long Island, NY.  If unsure, purchase your earthworms from commercial farms.

For more information on using earthworms and other invertebrates, please see my article Feeding Large Insectivorous Reptiles and Amphibians.