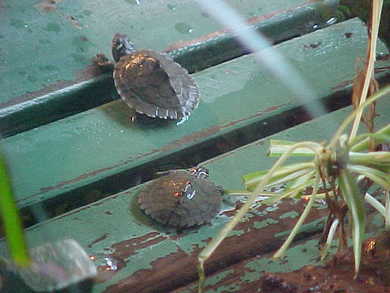 Swimming lopsided, raspy breathing, swollen eyes, loss of appetite, excessive basking and bubbly mucus from the nostrils or mouth. The eyes will often be closed over, and often red and puffy, especially with advances RI. This leads many vets to incorrectly diagnose vitamin A deficiency, so pay careful attention to the other symptoms.

Generally caused by cold drafts, or low basking or water temperature, but can also be caused by high humidity causing fluid on the lungs. Many shop bought hatchlings have RI due to the way they are transported, and beause it is contagious, especially if the conditions are sub-optimal such as crowded pet shop tanks.

Make sure there are no drafts around the tank, especially the basking area, and ensure that the basking temp is correct for the species (see appropriate care sheet). Water temp should be raised 3-4C, and a visit to a good vet will almost certainly be needed in order to get anti-biotics.

You will see the layers building up, creating layered peaks on each scute, and making the lines between the scutes more pronounced. YBS in particular seem to be prone to suffering from this problem.

It is usually caused by high humidity or inadequate UVB lighting, but can also be caused by low basking temp or high water temp leading to reduced basking. Poor diet can also contribute to the problem, especially lack of calcium and vitamins D3 and E.

Remove any lid or cover from the tank to reduce humidity, and make sure that you provide good UVB and heat sources for the basking area. The correct water and basking temps are equally important as there needs to be a definite temperature gradient to encourage the terrapin to bask. Ensure that there is adequate calcium in the diet, as well as vitamin E which helps build keratin, and small supplements of vitamin D3 can also be helpful. Care should be taken with dietary vitamin D3 however, as large quantities are toxic. A balanced pellet which has been supplemented with D3 is the safest and advisable method.

Similar to retained scutes, except the obvious layering of the old scutes is not present. Instead, the shell looks very lumpy, and scutes are domed rather than layered. Usually accompanied by the turtle looking generally rather podgy, although the same basic illness can manifest as various forms of shell deformation.

Long term overfeeding of high protein foods such as fish, meat, eggs, and most commercial pellets. People often don't realise how little food reptiles in general actually need, or are advised incorrectly, often by the food tub itself. Cat food seems the most commonly fed item which should be avoided at all times, even with carnivorous species.

There is no cure, but if it is caught early enough, progression can be prevented and it usually becomes less noticable as the terrapin grows providing a good diet is maintained. Feed plenty of greens, and limit the amount of protein in the diet as necessary for the species. Carnivorous species such as snappers will not eat greens, however a balanced and nutritious diet can still be maintained by feeding gut-loaded insects for an example, or certain vitamin-rich meats such as liver.

Lumps on either side of the head.

You will need to take your terrapin to a specialist vet so that the abcess can be lanced and drained, and anti-biotics provided. Home treatment is best avoided due to the risk of serious injuries to the terrapin.

Ranging from soft white patches on parts of the shell, to entire scutes falling off. Can affect any part of the shell, and often affects multiple places at the same time. Often goes unnoticed underneath old scutes, and can progress quite deeply into the shell, despite the fact it cannot be seen. Can lead to scepticemia, which can be very dangerous and often fatal.

Shell rot is generally caused by bacterial or fungal infection stemming from poor water quality, or lack of basking due to incorrect temps meaning that the shell doesn't dry out completely. It can also follow on from retained scutes as water and bacteria can end up trapped beneath the old scutes, causing rot to take hold unnoticed. Particular care should be taken to look for shell rot when examining terrapins after hibernation.

Dry dock in a warm area with a temperature gradient from low to high 20's for up to 20 hours a day depending on seriousness of the rot. Ensure the water is extremely clean, preferably cleaning the entire tank thoroughly when the rot is first noticed. Acriflavine (or a similar general bactericide / fungicide) should be applied to the shell around an hour after removing from the tank and at least an hour before returning so that it has time to act on the dried shell. A strong UVB source such as a MVB should be used to help, as well as maintaining correct water and basking area temps. A calcium supplement such as cuttlebone will help also, and ideally the advice of a specialist vet should also be sought due to the potential complications. Aquarium tonic salt will help keep bacteria under contol in the tank, or UVC's are an excellent addition to kill pathogens.

As for hard shelled turtles, but dry dock for a maximum of 4-5 hours at a time as softshells are more prone to dehydration. Softshells rarely bask, so the water should be treated with aquarium tonic salt and / or doses of acriflavine, as directed for fish. As above, a UVC can be invaluable for keeping the water quality at it's best, killing pathogens and keeping algae under control. As softshells like a sandy substrate, this should also be well sifted and cleaned regularly to remove trapped dirt and bacteria.

Patches of white on the skin.

Poor water conditions and not being able to dry out properly (ie. poor basking conditions) can contribute to the development of skin fungus, although sometimes it can be caused purely because the terrapin is choosing not to bask rather than poor husbandry.

Ensure that a good basking area is set up, with correct temperatures for both the basking area, and the tank water. If necessary, drop the temperature in the tank a degree or two below the normal recommended range for the species to help encourage basking. Dry dock for a few hours a day, applying anti-fungal cream every day for a week. Make sure also that the water is kept very clean. It may be that the basking area has been too warm for the terrapin to bask comfortably for extended periods of time, so raise the lamp to lower the temperature to see if this was an issue.

You may see the remains of parasites in faeces, and they may seem "under the weather", and weight will drop despite adequate food. Be aware though that there are certain aquatic parasites which will live in the filter, but cause no harm to your terrapin. If you do see live parasites (often stringy white worm-like creatures), then the best initial step is to thoroughly clean the tank and filter.

Usually only seen in wild caught animals, although they can sometimes come from live food items such as fish. Generally speaking not a husbandry issue as such, but nevertheless and important problem which needs to be dealt with.

You will need to take the terrapin(s) to a specialist vet for tests to confirm parasites as the problem, and suitable medication.

Our appreciation for the many helping to build this site.
HOME