Written by Zoe Stevens
http://www.candoia.ca
The Superworm aka Zophobas (Zophobas morio) - a type of darkling beetl larvae - is a common feeder insect. They are large, don't climb smooth surfaces, don't fly, don't stink, are nutritious and easy to care for, and this makes them great feeders, even if they are a bit more complex to breed than mealworms.

A tub or aquarium
Bran and/or oat, enough for a few inches of substrate. You can add poultry mash, but it's hardly necessary.
Egg crate, paper towel rolls, burlap, etc - for climbing
A source of moisture for the worms such as sliced potatoes or apples, or water gel in a shallow dish. Do not add too much of any of it or it will rot the substrate. Replace every few days.
Superworms (about 300 in a 10 gallon bin is fine).

That's it! Your supers will stay healthy and gutloaded as you feed them off.

If you want to breed them, however, a little more (but not much more) work is involved. To get the larvae (the worms) to pupate, they need to be separated and without much food. They need to be kept fairly warm and most homes are warm enough to encourage breeding. If your temperatures fall below 70F regularly, a heat source will be required such as heat rope wrapped around the bins.

I use a four drawer plastic storage case; it has two large drawers on the bottom and two smaller ones on top: 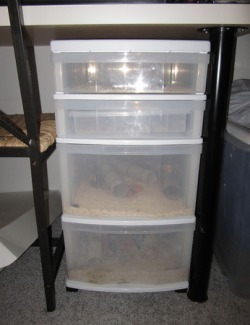 The bottom drawer contains the juvenile and adult superworms: 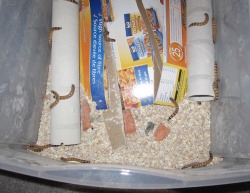 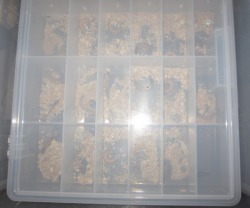 One of the smaller drawers contains the case I use to keep the super worms separate so they will pupate. You don't need to keep it in one of the drawers, but it's handy for me and fits perfectly. I've used one of those plastic containers with dividers for nails and screws; you could also use empty film canisters. Each section has an air hole and a pinch of substrate, and that's all. After a week or so they will curl up and another week or two after that they will pupate. 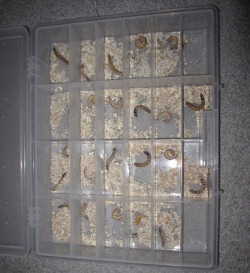 Pupae are moved into the other small drawer that contains a small amount of substrate and a piece of cardboard: 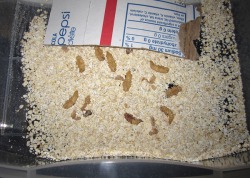 After a couple weeks, the pupae turn into beetles which are moved into the other large drawer, with several inches of substrate, some cardboard and a source of moisture. 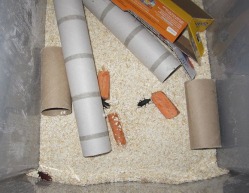 When they start breeding and baby worms show up, you can either feed off the adult beetles (as I do) or transfer them to a new bin with substrate and start a new batch of superworms.
Zoe Stevens site:
http://www.candoia.ca
Share |