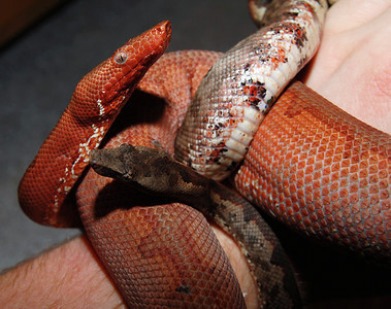 Sexing is the easiest part of breeding Candoia. No probes, no popping necessary. Males have large spurs on either side of their vents. Females do not have these.
BREEDING SIZE

When I first began looking into breeding my Candoia, I could not figure out if my males were old enough. I read 2-3 feet for males, 3-4 feet for females, and at least three years old for both before attempting breeding. I had very little history on any of my snakes, so I did not know how old they were - all I knew was that the males seemed small compared to the females. While the females were a good three feet long, and fat, the males were barely two feet and as thick around as a nickel. They seemed very small; I thought that they might even be yearlings, even though one of the males was purchased from a lady who said that she had had him for at least a year. I was unable to find much information as to just what size a male should be, except for a few references to "2-3 feet long". No one was really able to provide a photo of a breeding sized male with something for size comparison.
I was, however, able to find pictures of neonates. Earthworms are a good size comparison! Neonates are tiny - about able to wrap around two fingers and not much else. That, and a few photos of copulation snakes portraying obviously small males on larger females, was enough to convince me that if they weren't old enough to breed, they were at least two years old - old enough to try to breed and not be crushed by the females or something.
MULTIPLE MALES

If you research breeding Candoia, you'll find a lot of references to multiple males. The general idea seems to be that because these snakes are from an Island cluster in the pacific - and not all from the same island or region - that there may be some incompatible supspecies lumped together in the "Candoia c paulsoni" species. Or it may just be that another male's presence is helpful in getting them in "competitive" breeding mode. Either way, multiple males seemed to work well for those who had attempted breeding, and some even suggesting having at least two males for every female. That said, copulation without multiple males is more than possible; multiple males should simply be considered another tool if you have access to it.
My small group of breedable sized Candoia consisted of 2.2, so I figured that that would have to do.

Cooling them is not really essential, but they should experience a normal winter drop in temperatures when the weather gets cooler (note: the Solomon Island "winter" is onlyl a few degrees cooler than the summer). Some recommend a 70F temperature at night during cooling season, but I did not cool mine that much, for the simple reason that I live in an apartment, and the reptile room (also my bedroom) is shared by Amazon Tree Boas and Crested Geckos (and two humans who hate being cold), so the lowest it gets to is around 75F. I left the heat pad on, of course, for a warm spot of about 84F, but with a general cage temp of 75-84F. I reduced lighting by a few hours per day - pretty much corresponding to the shorter days of winter. I introduced the females to the males in late December, but some suggest to do it later than that - around January - February. As I was using multiple males and females, I just put all four of them together in a three foot tank and let them do their thing.
COPULATION BEHAVIOUR

And not much happened. The males showed no signs of aggression or sparring; at times, they even curled together in a corner of the cage. The females did not respond to their presence, either. It took a couple weeks before I began to notice copulating activity. At first, the males didn't seem to know quite how to "get it in", although they had the tail intertwining thing right. They more or less paired off - the grey male always with the dark red female, and the orange male always with the orange female.
The males really seem to "dote" on the females, and can usually be found where the female is. They seem to mate day and night, for several hours at a time. Over a period of several weeks, I had noticed the orange pair copulating every few days. The red and grey pair have not shown any activity (that I've noticed), since the first time I saw them entertwined.
Females gestate for 7-9 months.
GRAVIDITY AND GESTATION
I've compiled a list of behaviours that a gravid female might exhibit. Note, however, that these may not occur until the last few months of gestation, and apparently the ovulation "swelling" only lasts a couple days and is easily missed, so you may not have confirmation of gravidity for over 5 months.

Female "looks" gravid. You may observe that her scales looked stretched (you can see white between them), even if she has not eaten for several weeks. In the latest stages, she will look like a thick sausage with a little tail at the end.

Female refuses to eat or will only eat small prey. My female has been a great feeder ever since she settled in here, and she refused a meal for the first time just a few weeks ago. As the babies take up more room inside a gravid female, she will likely refuse large prey. If she does eat, she will only consume small rodents such as rat wealings or adult mice, and the interval between accepted meals may stretch as long as two months.

You may find your female is more aggressive. I have not observed this, but others have. Handling should, of course, be kept to a minimum if you think your female may be gravid.

You may obersve the babies being born one or two weeks after pre-birth shed. This may not always be the case, however.

A week or two before giving birth, the female will be more active as she tries to find the best place to give birth.
THE TROUBLE WITH FEEDING TINIES

Before going into this, I would like to state that I have no experience feeding or caring for newborn Candoia c paulsoni. However, given the possibility of my female being gravid, I have done a lot of research and spoken to as many people as possible about feeding and generally caring for the babies. Candoia newborns can be troublesome to feed; in the wild, they would consume small lizards or amphibians shortly after birth, and do not seem as keen on taking rodents in captivity. Until I have personal experience with this particular issue, I will simply list the ideas I have and the suggestions I have received:
Scenting with frog leg meat or frog mucus

"Starve" them for 6 to 8 weeks, at which point many will willingly take a pink mouse

Assist-feed mouse tails or use a pinky pump if necessary, (not my first choice by any means)

First feeding should take place at least a month after birth