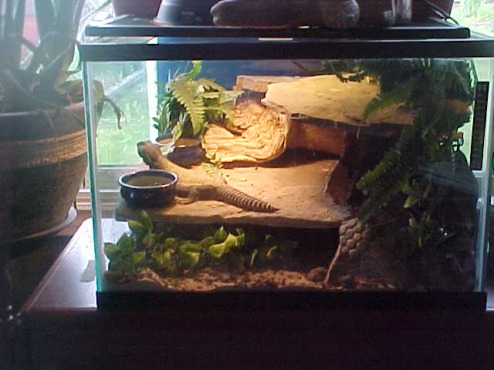 Java's new house is a 2 ft square by 16 inches in height.  While this sounds small, there are 3 levels in place and Java is using all of them.  The bottom level = 2 ft square, the mid level = 20 inch by 20 inch, the top level = 8 inches by 20 inches.  Totaling approximately 5 square feet of walking space.  And Java is loving life.
I do believe we have finally got it right!  The mid level runs 120 F, the lower corner at the back 85.  The third level gets him close to the UVB and the top level is where he tends to spend his late afternoons and early evenings.

The Uromastyx, Java, is one of the species that has had some difficulties fitting in.  With all the racket here his sense of security was sorely lacking.  Not being willing to take in a room mate, that may have helped ease the tension he was feeling, tossed that strategy out the window.  Perhaps, it is the distance from "civilization", or the smaller territory to defend, or that the bottom floor is almost blocked off is giving him a better night's sleep...I am not sure what the reason or combination is.  But, I do know that it is working.  The back of the terrarium is blocked off.  My husband's desk is to the side but completely blocked off from sight.  To the left of him is the pond where he is only coping with turtles and fish, and there is a 5 ft distance from the front of the cage to the most traveled passageways around him.  But, the challenge now will be can I keep his humidity level low enough with the proximity of the pond.


I had been worried about Java and he was the last one in the "hospital" setting.  He was losing weight, eating little, stressing much, basking much less, looking depressed.  I worked with veggies that had extra water, Electrolize, hand feeding him every day...wasn't working.  Looking at the history I decided to give Java a dose of demormer.  (I was concerned about doing so, as with dewormers plenty of water is recommended.)  He did pick up a few days afterward and his appetite returned.  I am happy to report that Java is gaining back the weight he had lost.


Java is an absolute hoot!  And a real pain too!

I got Java from Colisanti's last summer.  He was a personal pet of one of the keepers placed on display for a year.  Java is very communicative and you know exactly what is on his mind.  He doesn't like to be held.  He wriggles and squirms, and huffs and puffs.  He expects to be treated like Royalty and be hand served or he will refuse to eat.  Will not touch any live food and gets the heeby jeebies if one touches him.  Does not like to be close to civilzation, it disturbs his peace.  He is a terribly late riser and grumpy when he does show up!  But he also perks right up when you say his name.  Looks straight up at you........Is it time for you to feed me?  While I have tried to break him...he won the battle and this is Java personal time.  His name derived from the Star Wars character, is very apt.

Java will never, nope, don't wanna, not going to happen lady, fat chance......ever........going to live well with another species.  He is not violent but the stress will destroy him, rapidly.  What more is there to say on that subject?  Java doesn't take well to change in his habitat, or location either.  When I have changed things on Java he has a rough few days, trying to escape, figuring out where he is going to sleep, what the sights and new noises are around him and he doesn't feel safe.   Again, I will break out the electrolytes and he is right as rain in a few days.

These are also the times to keep a close eye on their health.  Internal parasites can overwhelm the lizard at this time if he isn't eating well and is stressed.  Rehoming is a crutial time to watch for problems to arise, as well.  A product I keep on hand and use often for new arrivals is Electrolize.  If you can get your buddy's appetite up and get him eating well, he will settle in faster. 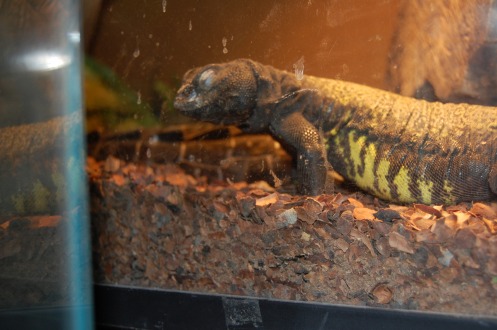 There is actually a purpose for showing you the dirty glass...I believe, Java snorts excess salts onto the glass.  I have read that Desert Iguanas are guilty of this and have read that Uro's often have salt deposits surrounding their nostrils.  My glass says they do snort to rid themselves of it. 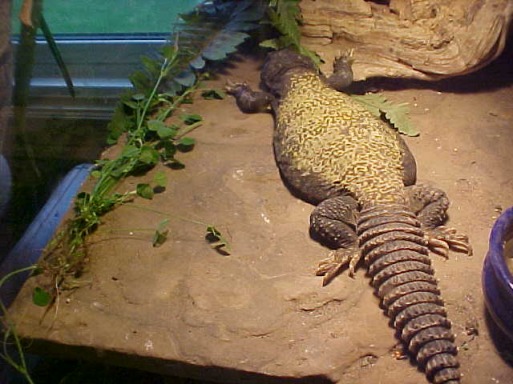 He makes me want to hug him! (I settle for scritching his back and making him wriggle.)  Great guy!  But he is also finicky, demanding and unforgiving of husbandry mistakes.  If you are the type that follows the rules and have a quiet home, a Uro may be what you are looking to find.

One last thing, before you leave me.  Uro's are handlable.  Gentle creatures mostly.  But have you thought that when you take a Uro out of his setting and into ours you are dropping the temperature 40 to 50 degrees f, on your whim?

Java suddenly quit eating on me.  I have been struggling to figure out what the problem may be.  Java napped through the winter...but like most of mine, was up and down every couple to 3 days.  (I think I tend to give late fall conditions instead of full winter.)  Eating once a week / 2 x.  He has been extremely active, attentive to voice, etc, but just stopped eating dead cold.  He has been offered a HUGE variety of foods.  "Nope, not touching nothing lady."  He has virtually gone 3 weeks.

Some days I can be slow!  Three weeks ago, I had taken the environment apart.  Three weeks ago, I took off the back covering so that we could take advantage of the strengthening sun, attempting to take advantage of nature saying it was time to get up and see the world.  I had also adjusted his environment some.  Double whammy for him.  Java is very sensitive to change.  This type of personality is difficult to maintain in a healthy state if your home is active and alive.  But, I got to say, I love the little beast!

Sure enough........Java off his hunger strike 24 hours after blocking the back of the environment.  You are tooo much Java!

My Java's end was sad.  Java was in a 120 gallon and had resided in there for a year.  He went missing for 3 days.  By the fourth day I started tearing the slate and rock area down to find him and check on him.  Java had managed to get himself behind the supporting back wall of the rock and had gotten himself wedged in incredibly tight.  His neck was stretched and bent backwards.   I got him out of there and immediately was running an electrolyte bath.  Java died within a couple of hours. 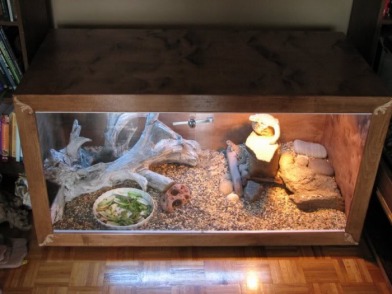