AUSSIE ON THE LOOSE 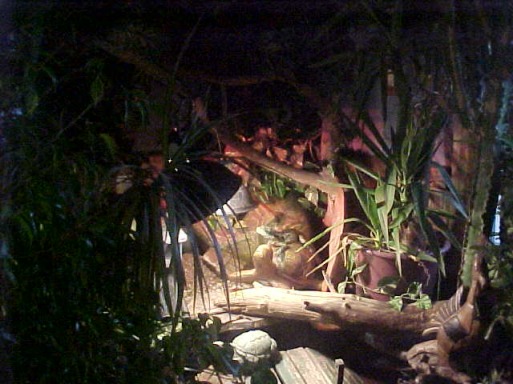 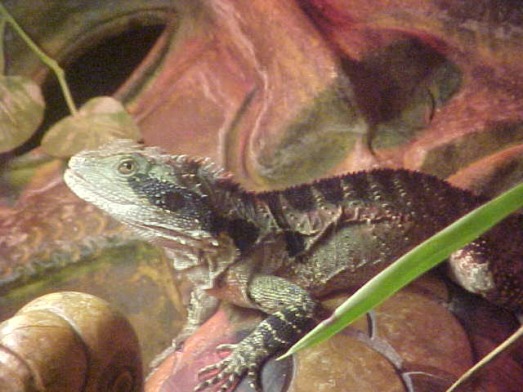 The heat lamp is positioned to hit both the bridge and the log and a rocky area~100 watt.  The wooden turtle makes a nice place to lay and is his favourite, though he is also using the log.  The humidity in the house runs around the mid to lower 50's on average because of all the water, higher in that area.  The big ficus at the back is a fake and a great hiding place.  But as I state fairly regularly in the forums, he has gone to the water for safety, and hides under the bridge and at its darkest, furthest end. 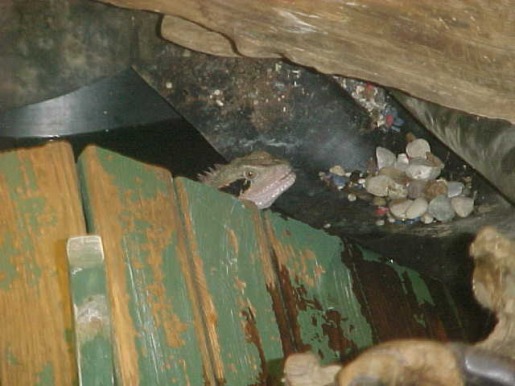 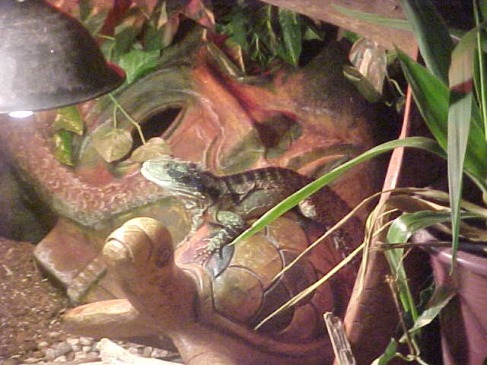 He has been seen daily entering the pond by choice. (not panic).  Interesting, is that he is staying within a few inches of ground level.  Yeap, thats the basking area but ~ he hasn't yet taken to the higher branches.  I am thinking that is likely from living no more than 2 ft .5 from the ground all his life.  And I wonder how long it will take for his instinct for height will kick in. 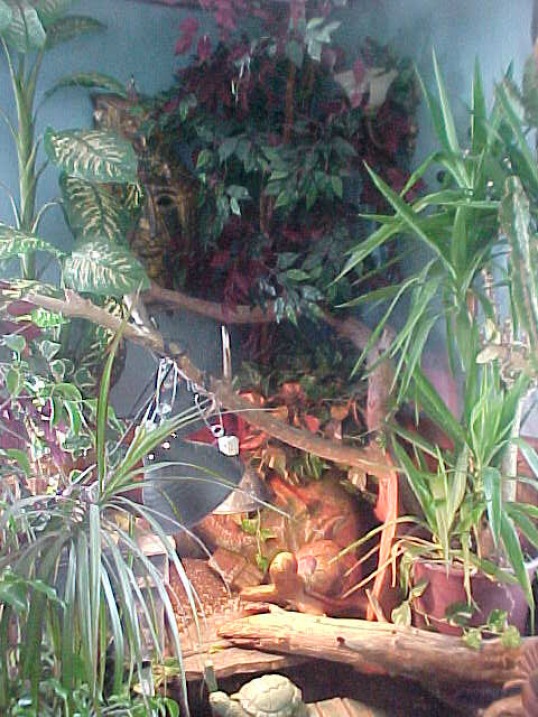 This should be almost maintenance free as he will take to the water to eliminate.  I may have to clean the pump and filter a very little extra.  The pump has to be cleaned monthly and the filter every 10 weeks to 3 months.  Unless I screw up and feed the turtles and fish too much which the filters hate. 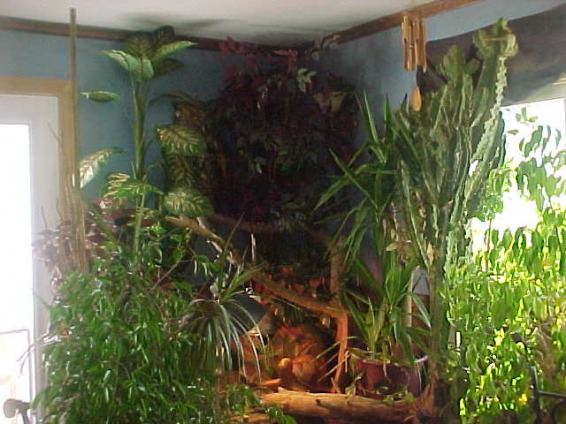 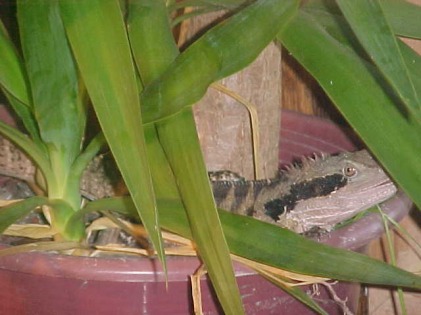 I have seen him hiding in this plant pot on a number of occasions now.  This plant should stand up to him for climbing as well.  But I sure am hoping he stays away from the ficus which won't last long.  He is a hefty boy. 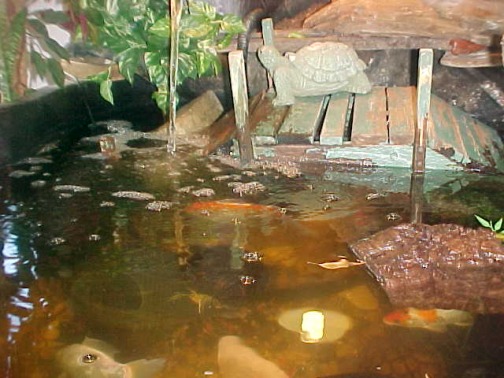 Excuse the water quality.  This was right after creating, moving and cleaning.  The pump will take about 12 hours to clean it really well.  Unfortunately, I can't move the filter box without dumping some of it back into the water.  The second half with the most sediment I water all my plants with...they love it, and would thrive if I watered them more often. 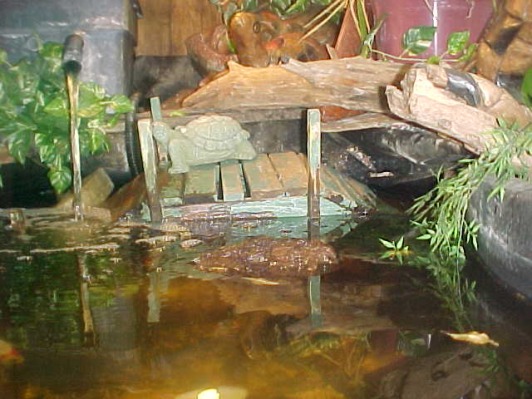 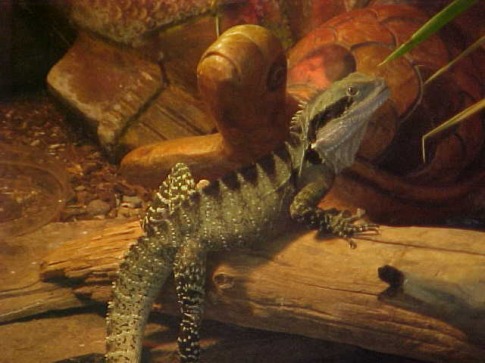 It's been a week now.  He has done some exploring taking short trips outside the pond area.  Mostly he just ends up startled when I pass that way and high tails it back to the pond.  A couple of times he has made it to the dining room and once to the kitchen.  The kitchen was a late in the day trip and he ended up behind my desk.  When I turned on the lights at the pond the next morning he was installed under the lamp waiting.

2 weeks:  We seem to run into wandering every second day.  Again,  he ~ recently confirmed, mostly he is caught out fairly close to the pond and will dash back to it.

We are now into the 4th week.  It is actually working really well.  He is doing less wandering and has only made it to the kitchen  once in 10 days.  It is now a game we play.  He turns tail and scrabbles for the plants around the pond or under it.  Looks back at me and says.  "Safe!"  Other than the one time I haven't caught him further than 5 feet from the pond.

He has taken to sunning himself in the middle of the floor, following the light as it moves.  My husband sitting at his desk in the room doesn't seem to fizz on him, until he makes a move and then he dashes back to the pond.  If the house is quiet it will roam and when we return from being out and about we quite often find him outside of the preferred location.  I haven't begun to see a slow down in his behaviour yet, the Uro and Blue Tongue are definately verging on brumation.

I'll talk some more as I am learning whether this is going to work or not.  Should she go down to brumate, I am going to be panicked the entire time. 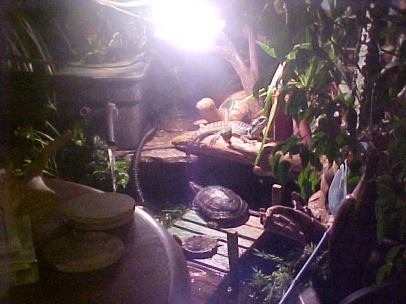 Winter is coming to a close.  Woo hoo!       The Australian took it easy on me and would nap for a couple of days at a time and then show up for a day or two, have a snack and retreat.  He chose behind the mask as his napping spot.

His wandering habit, is a concern.  He does tend to stick to his pattern.  Staying home for a couple of days followed by a couple of days of wandering.  He follows the path of the sun and bright days on the floor area around the pond.  The dog and the cat walk within a foot but it does not disturb him.  (Our dog Maggie is very timid, and the cat has learned to leave the lizards alone, but she wouldn't take on the Australian due to size.  The sounds of a new batch of crickets will entice him to wander.  We end up with a few crickets wandering the floor regularly and he snatches each one he finds.  This I will have very little control over.  I don't feed him crickets within his "zone", and he is going to be attracted by a favourite food staple.  When he travels he is staying at ground level 90% of the time, with one exclusion...if he reaches the living room, he goes and sits on top of the hexagon, his former home.  He also joined the Russian Torts on 2 occassions for a few minutes of sunning.  Didn't seem to intimidate the torts who chose to remain in their favourite spots.

He is learning to take advantage of the height and has been spotted at the top of the fake ficus, head at ceiling level.  He has also found the mid height branches and is seen regularly basking there.

The turtles have adjusted to his presence over the winter and they also are spending more time basking on the bridge.

Things are going so well over in this area....I decided it was time to complicate it....and cut the Spiny Tail Iggy into the real estate deal. 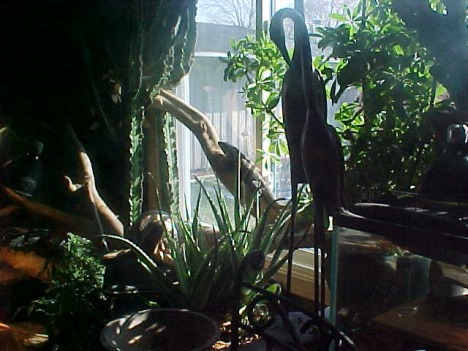 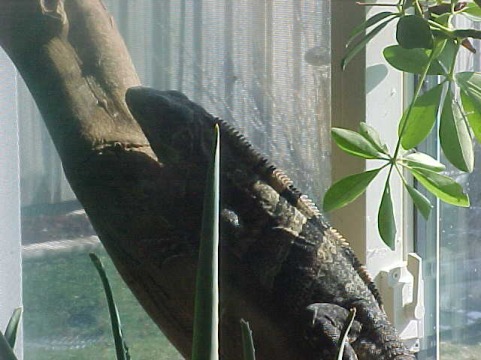 So, what were the thought processes behind this addition and why do I believe that this situation will work.  First off, the Iggy was very underhoused and in desparate need of an upgrade in both condition and space.  The natural humidity in this area should be to his liking.  Over the winter it has been in the 30 ~ 35 percent range.  A little low but an acceptable level for a seasonal variation.  As spring warms and the furnace shuts down the humidity in the area will rise.  I also know that he will be fine without night heat as he has never had any previously.  As for basking there are numerous levels and areas, he will choose that which suits him best.  I have fixtures on order to place another UVB in the area by the window.  There will be sufficient heat coming through there as it is a south facing window but UVB will not penetrate and have to be supplemented.

He has always been a very nervous lizard.  Quick dives for cover even when placing the food bowl in the tank.  Four years haven't changed that though he recovers faster these days.  The pond area will give him 3 feet of space between him and us.  Already this seems to be sufficient for his feeling of security as I got within that distance to take the above photos without incidence.

These 2 have never lived together prior.  Though each has had a half dozen room mates along the way.  The Iggy is a tad larger than the Australian, but size is comparable.  The Iggy is not an aggressive lizard and will not be an initiator  of trouble.  The Australian will have second thoughts about taking him on and the two should settle well.

It took less time than expected for the Iggy to come to terms with the change.  I moved his favourite hiding spot with him but he has abandoned it for better digs.  Within 24 hours he was spotted at the top of the fake ficus, scoping out the area.  And spent his 3rd afternoon in the window sunlight.  The Australian is ducking when the Iguana is on the move but otherwise is being watchful and aware.

Well, folks...it didn't work out.  The Iggy stayed in place and enjoyed himself for a week.  Then decided to take a walk.  I caught him the first time and chased him back, but he made a successful attempt just a few minutes later and was missing for a week. (though he did visit my husband while napping on the couch)  Eventually I found him behind the 148 in the living room.  Unfortunately, it is back to 4 walls for this guy.

If it had not been for the Cyclura being so underhoused, I would have gone this way in the first place and put the smaller Iguana over there.  Since I have seen him live very well over there on a number of occasions.  He lived there for 10 weeks or so, the day after he came here.  He has lived there on 3 other escape adventures as well.

Do I have an Eastern Water Dragon or a Gippsland Water Dragon?http://www.anbg.gov.au/anbg/reptiles/dragon-taxonomy.html
Share |