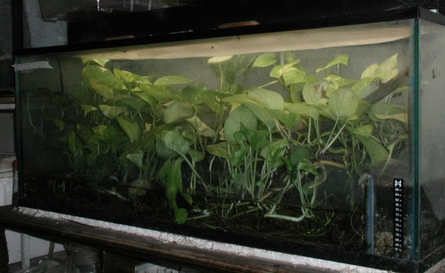 Most, if not all reptiles, including geckos can swim.

I have a 'river' in my hatchling tank, approximately 10 gallons unless I didnt' top it up for a while. There's a powerhead set to minium and a Quick Filter attached to it so the water is always filtered and very slow, almost non-existent current. Also, there's a ton of pothos rooted in the water to cut down any current from the powerhead.

The cresties go down there and hang out in the pothos on warm summer days, it's higher humidity and cooler so they don't overheat. I've seen a few drink from the water, not often, but it happens even with a water bowl and 3x daily mistings. 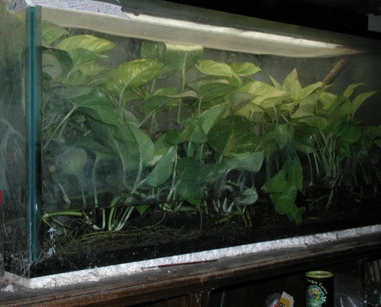 You can see the river at the front of the tank, almost the complete length of it.

If you keep the waterfall CLEAN, it shouldn't be a problem. Trouble starts when you can't really put a filter in there, the reservoir is rather small. Any poop will be churned to mush in no time, a great place for bacteria to grow. Crickets can drown in it, they're known to prefer death by drowining over death by dinner menu.

My river is filtered, the water is changed and tested just like I did when I had fish. If you can keep the water quality in the waterfall good enough that a fish could live in it, then there's probably no need to worry. If you're just circulating water for the sake of a waterfall and it's really a bacterial soup, then don't use it.

I do water changes every week, just like you'd do with an aquarium. The soil has been in there for 10+ years, never touched it.
Don't faint. It's okay.


There are sowbugs, pillbugs, springtails and other microscopic soil critters in there to break down the organic matter - plant or poop, and turn it into fertilizer. The pothos is started in the water but most of them have taken root in the soil and use up the fertilizer. It's commonly called a bioactive substrate - cleans itself.

If you just have some substrate in an enclosure but nothing living in the subtrate to break down the organic matter, then you have to clean it regularly. Having a bioactive substrate is imitating nature on a tiny scale - it all takes care of itself. 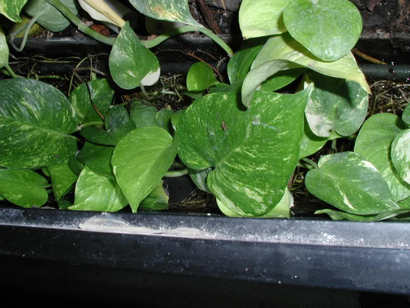 All I did was get some tempered glass about 6 inches (15cm) high and a bit shorter than the width of the tank, one piece the same height and 8" 15cm long.
I positioned the long piece about 7 inches back and up against the left wall of the tank to form the river area and siliconed it in place (held upright with books until the silicone cured). Then I added the smaller end piece to the right side which was still open to form the end wall of the river. The reason for the river being shorter was to allow an area for me to monitor the soil condition by just looking at the front instead of trying to get around the side of the tank.

Once the silicone dried for a day or so, I added some shelf supports - those "L" shaped metal thingees - on the soil side, outside the water area, to support the long backwall of the river, silicone in place. The next day cover the entire support with silicone so it doesn't rust. A few days after it had all cured, add a bit of water to make sure the river is siliconed properly. I had to siphon out the water 2 times because of leaks higher up, the bottom was okay first time around. If there are no leaks, remove the water and start on the back floor area. If you leave the water in while working on the soil section, you end up with mud... it's much easier to remove the water first. I used a few old under gravel filter plates, chopped to fit as needed to raise the floor a bit. Then a layer of pea gravel which I covered with fibre glass screen to keep the top layer from seeping down. The actual 'soil' is a mix of peat moss, leaf litter, potting soil (no perlite etc).

There's a spray bar along the length of the river which disperses the water output from the aqua clear power head. I drilled a dozen or so extra holes into the bar to take off most of the pressure and put one fairly big hole at the far end to make sure the water could flow out easily, no excuses. I didn't want any high pressure, just some gentle water movement to keep it oxygenated and not stagnant. Once the soil layer is in place, add the spraybar, powerhead with quickfilter (it ensures there's no strong suction into the powerhead to keep any swimming geckos from getting minced). The powerhead is the weakest thing I could find, most fish keepers would cringe at the lack of output from it but it's perfect for this. When it's all assembled, add water and listen to be babbling brook sounds. It is very calming in winter when the snow flies.

The light I use on that 48" tank is a double fluorescent fixture, no special tubes, just vitalite powertwist.

If this isn't clear enough, let me know, I'll explain it a bit more.

The pothos was rooted in the water as well as some planted in the soil. To get the bioactive substrate seeded, I added some soil from a thriving houseplant (lots of microscopic critters there to get going). A few dozen pillbugs, sowbugs, sprintails added got established easily. They'll eat the decaying leaves and other organic matter, once in a while I'll dump a spoonful of MRP in for them too as a treat. The hatchlings will eat the bugs, though springtails only seem to interest them the first few weeks.

When I was doing the misting this evening, I happened to see a little guy on a pothos leaf close enough to the front where I could get a picture of him sleeping above the water. If you look closely, you can get a glimpse of the powerhead as well. Right now there are 14 hatchlings in that nursery tank, but I rarely see any of them unles I start parting the leaves and make an effort to find them. They can't complain to anyone that I didn't give them their peace and quiet, they surely aren't stressed out from people gawking at them 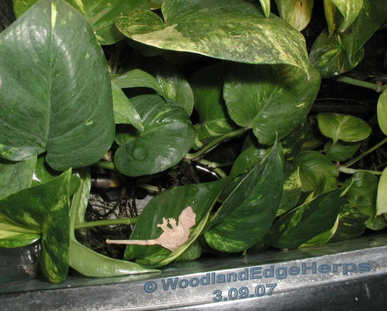 For anyone who couldn't understand my write-up, I tried to make a diagram of what I was attempting to say. Maybe this will help a bit. 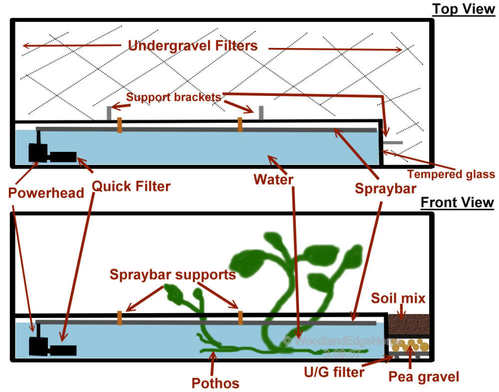 A heartfelt thank you to all those participating in building this site.
HOME