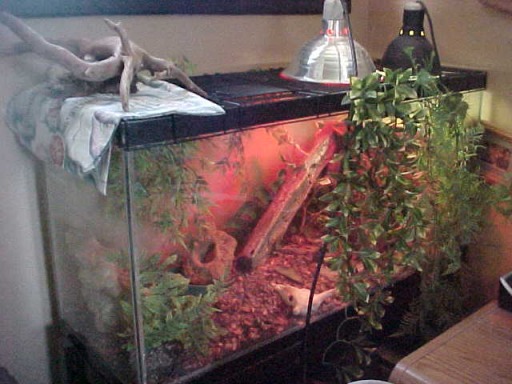 This is the set up this week.  Heat pad on the right end of the habitat.  Red heat bulb I am currently leaving on all night...this doesn't give them a cooler night but I am finding both are sleeping on the ground floor right below the heat lamp.  10.0 UVB  Temperature at it's hot spot is 105 F.  Cool end...mid 80's.

These 2, as with any other Agama's I have dealt with are flighty.  Any movement in the room will usually send these lizards into a tail spin.  That would be the reason for the plants on the outside of the terrarium.  To provide them with more covering with enough of a view that I can see what is going on in there, in particular the basking being done and the food dish.

My "emergency" place has lots of furniture.  This is NOT the established practice.  This is a personal choice, as I believe that it is healthier mentally.  Being able to feel safe, relieves stress.  The amount of stress they are feeling is a part of the equation to getting them healthy.  Most keep a very sterilize environment, as free of bacteria as possible.  With good reason.  You have to make the choice for your pet.  If you would like a more sterile place consider arranging plants on the outer areas. 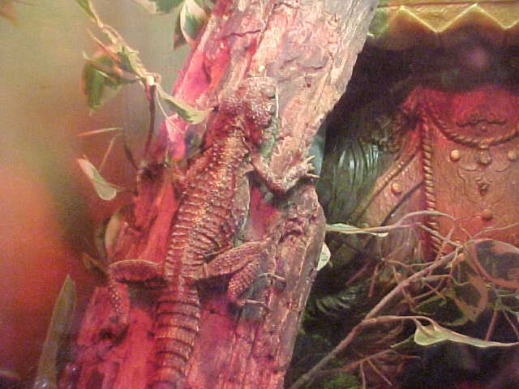 His belly doesn't look too bad in this picture, only because I had just force fed him, water, Electrolize and Spirulina.  Three to 4 hours from the time this was taken, his ribs will be showing his belly concave.  He is on the branch only because that is the place that I left him....otherwise, I have only seen him at ground level, though his partner is climbing often. 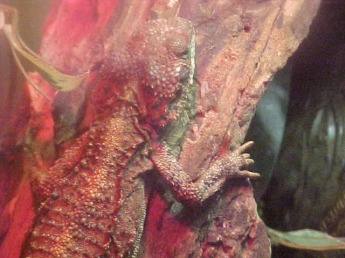 Here, both the shoulders and tail show his condition better.  The tail has completely folded in on itself, making a deep V shape on the underside.  This little guy is missing 3 toes on his left front. 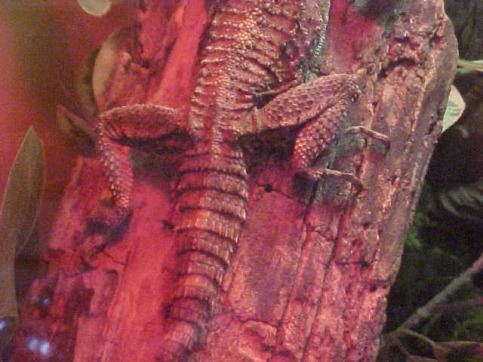 Dewormers can be very hard on an ill lizard and enough water is absolutely necessary.  The dewormer I have lists 2 sets of instructions.  The first a precautionary or the second as a confirmed case of worms.  I ALWAYS use the the precautionary.  Parasites are not uncommon in reptiles, it is only if the health of the lizard spirals that they become problematic.    The point being to get them healthy enough to fight the parasites back into submission.  There is not a lot of time left to make decisions, so I used the dewormer.

I am happy to report that yesterday I saw him eat a cricket.  1   Today he got 2.  Plus I saw him munching a superworm.   He still looks terrible but is becoming a little more active today.  (Fingers crossed that I got it licked.)

It is 3 days later and we are not out of the woods yet.  He is somewhat more active for short periods.  Even caught him basking on the wood.  But I haven't seen him interested in food again.  In another case the vet told me that the worms/parasites cause severe cramping and that though they want to eat they regret doing so.   If you are seeing your pet interested but hesitating at the last moment and not catching his crickets, watch carefully.  In this case, I am going to give him a second precautionary dose of the dewormer.  With a second round of giving him water by syringe for 2 days following the dewormer.  The first day will be without any other supplement.  The second day will be Spirulina and Electrolize.

The other agama has been moved out of here.  Doing great. 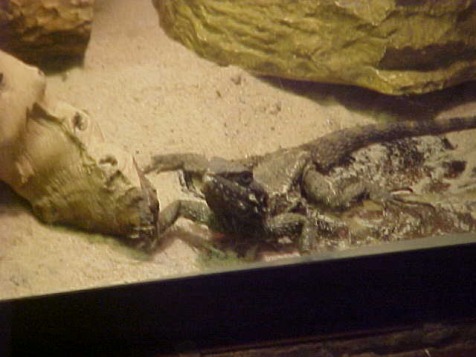 Their tails can tell you alot about dehydration and fat stores.  This is true of many lizards.  The top is the healthier of the 2.  Healthy enough that with the proper husbandry conditions he will pick up on his own without any aid.  You can see that his tail is still squashed looking near the vent for a couple of rings.  The picture below is June 15 of the second little guy.  Down to the 5th or 6th ring is flattened. 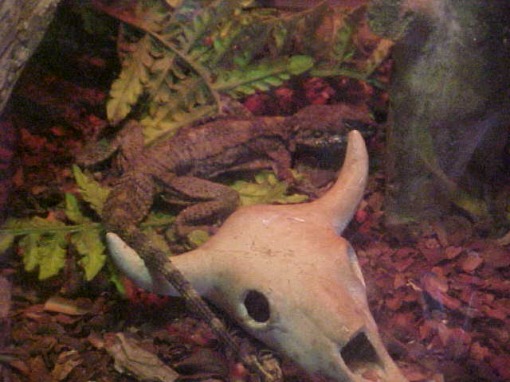 Well, we did it.  Off the critical list and into a general ward room.  Five superworms today that should help him start putting some weight back on.  Below is the most recent picture of the little guy.  He is eating everyday.  Is becoming more active, yet settled, climbing, his colouring is much better as well.  I am now turning off the infrared at night and leaving him with just the heat pad.  June 23/08 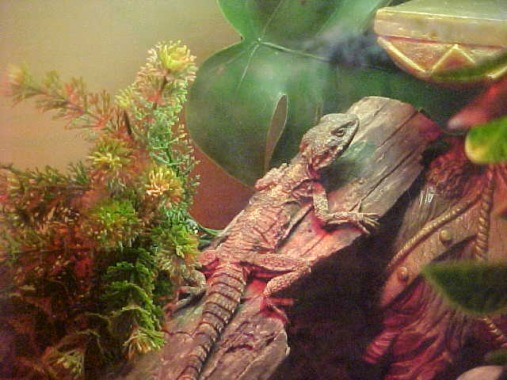 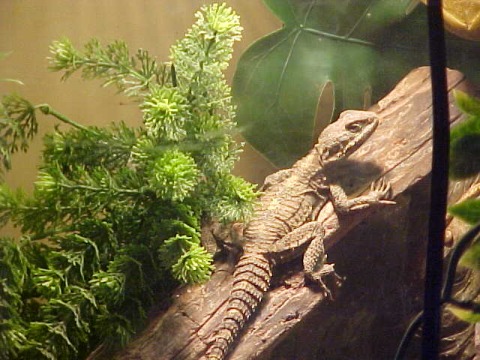 This is the little guy ~ it is still a little under a month since his arrival.  He is well enough now...he is even chasing AND catching little moths.

Keep a jar of baby food:  meat, veggie or fruit depending on the species.  An eye dropper or syringe for using.  There are a couple of tips to help open their mouths.  A hard piece of cardboard or a credit card will help wedge it open.  I find if I am holding the lizard and tipping it to the side a little I can maneuver the eye dropper between his "lips".  Some will lock the jaw down hard and you can't penetrate, others will get a little in their mouths and cooperate a little.  Stroking the throat or gently pulling on their skin can often help.

These were both male and should not have been residing together.  The intimidation of the larger reptile led to the health issues of the smaller male.  Separated, they both lived quite well with other reptiles
Share |

With heartfelt appreciation for the many helping to build this site.
HOME