TO THE BROWN BASILISKS 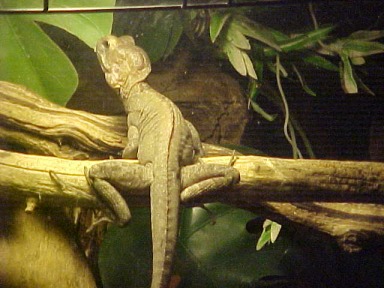 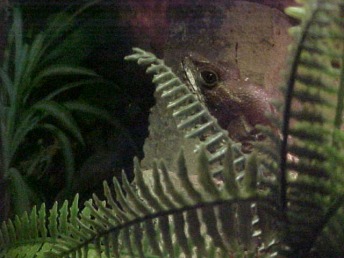 Both of the Basils have passed on, within 8 weeks of each other, though they have been separated for 6 years from each other and experienced differing environments and cohabitats.  And B&E has suffered a depression with the separation from one he has lived with for 7 and a half years or so.

B's companion, the smaller and shyer of the pair has lived with him since arrival as a hatchling and a favourite here.  The only sign ever shown between these 2 was a little head bobbing from time to time.  B&E because of his former injuries is a laid back guy and his basilisk trusted his judgement completely.  A perfect match for a very nervous and easily stressed Basilisk.

The basilisk never learned to trust me when placing food in the environment and dove for cover every time, returning right quick for the offerings in the bowl.  It would stay until I shifted the lid, then dart.  Every once in a while they escaped but being so panicky they were easily caught within a few minutes.

This is a species that I will not work with in the future.  Basilisks have much too much nervous energy to make a good house pet.  To make them feel comfortable I recommend 3 feet of depth minimum, 5 ft of height, in a quiet room.  Keeping Basilisk stress levels down is difficult and I made use of calmer species to help.

My spaces are small.  The pair of basilisks were good living together until maturity.  Separation occurred when head bobbing, arm waving and chasing began, they could not be within sight of each other either, it caused much stress for both if they could view each other and it would become obsessive behaviour quickly.So, one was kept at the front of the house, the other in the back room, usually.

I also found the basilisks fairly aggressive with other species, incapable of living with anything smaller than they were to approximately 1/3rd larger.  They did live successfully with the Chameleon and I believe much of that had to do with the traveling speed of the Veiled.

I cannot recall either needing any special treatment with the exception of watching the stress level.  They would hunger strike when changes were made in their environments.  Each tended to go a week or so without food before rebounding, slowly at first but by the end of the second week back on track.

B's Basil was ill for a couple of months with swelling on extremidies, consistantly basked and was still eating.  Replacing UVB's didn't help.  I reached the conclusion that it was likely gout and/or kidney related due to a higher protein diet than their systems require.  One way to avoid this is to feed a life diet higher in earthworms.  The lower protien amount will help protect the kidneys.  (Also true for diabetics......though I am not switching to earthworms any time soon!)  Adding worms as a staple and well taken by Basilisks, will help you at the other end of their lives.

The other who passed just a few days ago showed very little signs of illness.  A bit quieter and remaining more in his corner, there was a minimal amount of swelling on one front foot.  Shed was still good, eating well, a little on the hefty side.  Died quietly in his sleeping spot. 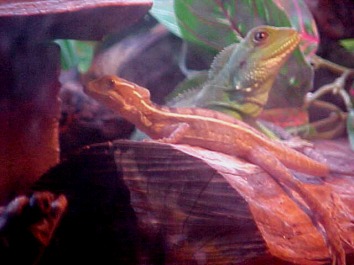 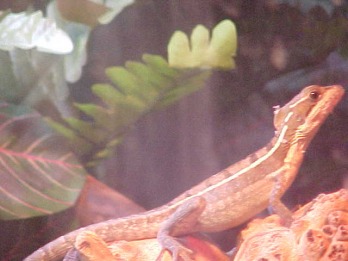