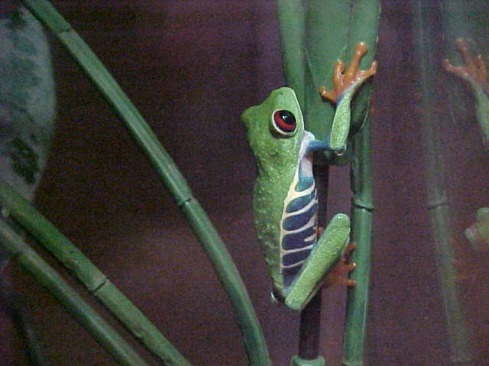 There are days I need to grow up and be more responsible.  Although, very embarrassing it is a tale that needs to be told.   I am a binge-aholic.   I go many months without purchasing a new buddy...and then one day I can't handle it anymore......AND....my resolve to control my addiction crumbles.  I envy all of you who attend the Reptile Expo's.  I just can't do it.  I am like a beardie that just had 20 crickets dropped in his tank, darting here and there, gorging on it all.  I may end up having to ban myself from the Vivarium in LaSalle this year.

So, the tale begins....I have been on a binge and the timing is not good.  And  I may end up with a failure or two to report.  Let my story be a lesson in moderation.   This is what I have brought home in the last 3 months in species that I have confidence in keeping:  4 green tree frogs, 1 whites tree frog, 2 fire bellied toads, 10 fish, 2 map turtles.  All of these species I already keep and are doing well here.  But then I added into the mix:  1 tokay, 1 pacman and 2 red eyed tree frogs, that I haven't kept before.  I can eliminate the tokay as it has settled in well.  At a time in my life that my other half has been absent for 4.5 weeks, with another 2 weeks to go, and I am covering all of his responsibilities as well as my own without any transportation.   Hmmm.......what have I done to myself this time?

And one of my red eyed tree frogs is taking the brunt of it this week.  I brought home the pair  approximately 3 weeks ago.  They are a decent size ~ just over an inch or so.  About 5 days ago I noticed that the eye lid of one was looking rather strange and checked back on it the next morning.  It was much worse.  I changed their environment immediately to one with less humidity.  By the third morning the whole side of his face was black, the eye area very swollen.  I grabbed the visine and used a drop followed a couple of minutes later by rinsing it off.  Which of course, was probably not the brightest thing to do.  I scrambled through the 3 frog books I have and came up with hydrogen peroxide which I diluted with treated water using a q-tip to apply it.  I rinsed the eye area a couple of minutes later and left him in a small container with treated water and Electroliz for 10 minutes.  I have repeated this 3 times a day about 4 hours apart.  Twice I have not had enough water mixed in with the peroxide and it must have stung as he began rubbing it with his leg. 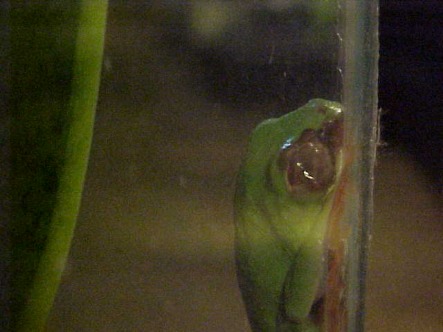 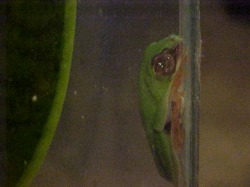 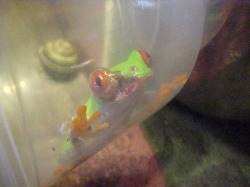 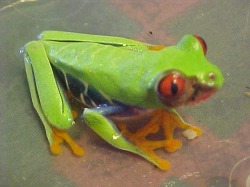 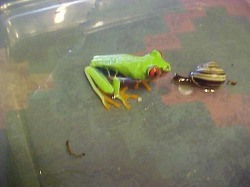 These last 4 pictures are taken this morning  (Friday) at about 10 am.  To date this whole process has taken 7 days.  And I am beginning to breathe a little easier. 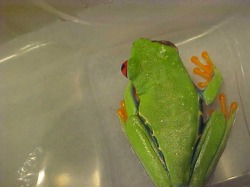 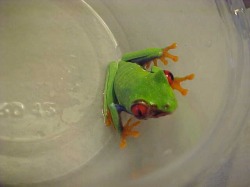 This is now Saturday morning and I am not sure that I have seen much progress over the last 24 hours.  His colouring is a little blue in comparison to the other.  Though the swelling above the eye is definately receding.  I have stopped the peroxide, the last being yesterday morning.  And only soaked him once last night in Electroliz and treated water.  I have done it by placing him in a square container the size of a sheet of paper towel.  Put in the water, conditioner and 1 drop of electroliz and stirring.....then adding in a couple of sheets of paper towel and placing him on it.  This morning I added a drop of pure aloe to the water.   The last 2 mornings he has been much more aware of what is going on and harder to get a picture of and gets into escape mode.

Through all of this.....I lost the brown swift.  Never had a clue that anything was wrong.  Still eating and basking. He came here in Nov. last year, as an adult, and possibly W.C., but had settled in very well ~ I thought. I also had to tear apart the 148 g.  after seeing that a green anole had lost his tail.  I removed, Way, who has grown to be 3 times his size in 6 months in case he was the clulprit.  And rehomed the anole as well. 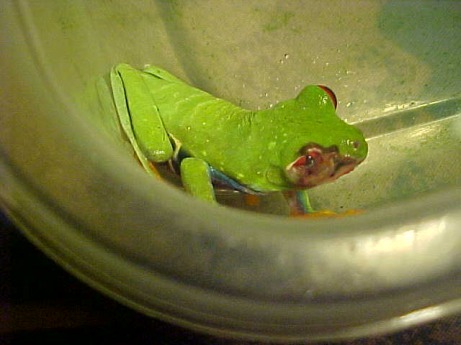 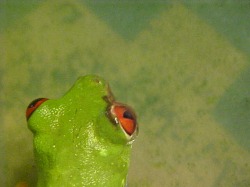 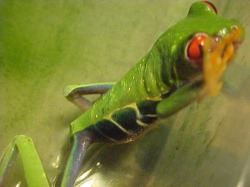 This little guy really is objecting to this daily photo routine.  Sorry for the quality which shows very little of the injury today.  He scared me this morning...he was looking very dark and blue and when I first saw him seemed to be gasping and rubbing the eye.......but I realized it was because I had turned on the UVB in his face.....I am using a small 2.0 UVB designed for small fish aquariums.  This morning rather than the aloe I placed some spirulina into the water as it is known for its ability to improve the immune system. 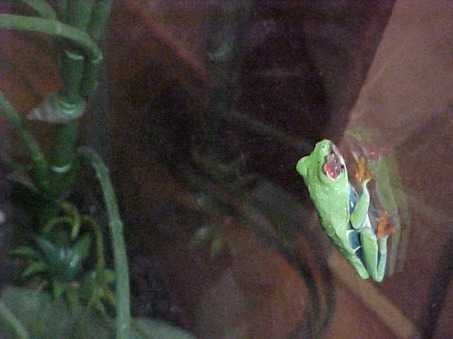 The first is of the little guy.  That's the best we can do for the moment.  I am not going to take him out and soak him today.  I will use the fogger with Electroliz in it.  He was, as he has been, doing some wandering last night, usually in the morning I have been finding him fairly low in the tank, though on the wall.  Today saw him 3/4 of the way to the top of the 35 gallon hex he is in.  The other is the 2nd tree frog purchased with the first.  I brought them home a day after Mother's Day, I believe. 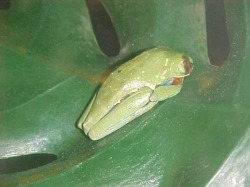 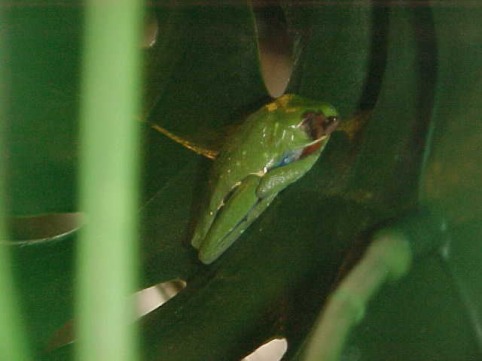 The above pictures are Tuesday morning.  Below ~ Wednesday.     The lower lid of the eye had filled with fluid that broke open just before I was taking this picture.   I had found a bottle of Georges Aloe in my cupboard.  (To mix into a bird's water source.)  I pulled a q-tip across the area after immersing it in the aloe.

I then put a dab of flour on the wound to help close it.  The black area now showing in this picture is what I believe is the original wound.  Inflicted by the water dragons claw.  Although he had not attempted to open his eye prior to the aloe, he did afterward and I did not see that the eye had been affected.  And within a few seconds of stirring managed to escape, jumping a foot or so at a time. 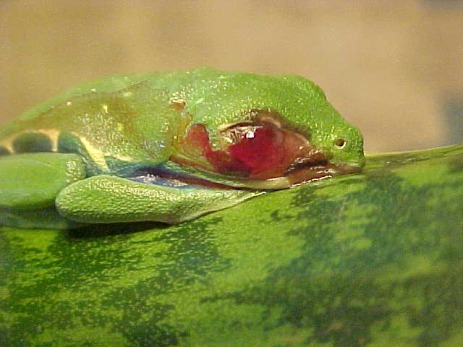 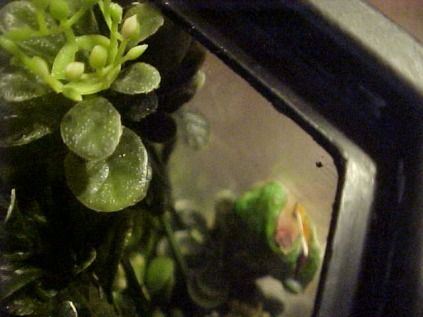 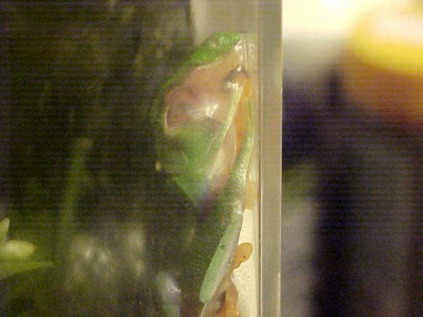 The bursting open of the abscess?, the other day was definately a set back.  The wound was very raw looking over the last couple of days (apologize for not keeping up).  On the days I have kept the humidity level high the wound does not seem to make progress.  The 2 pictures above are of Saturday morning.  The eyelid covering is very transparent currently, but the area looks dryer and like regrowth again.  Below, Sunday morning. 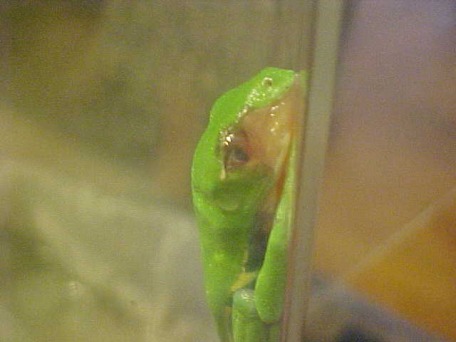 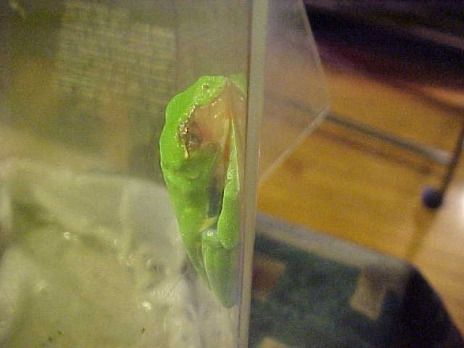 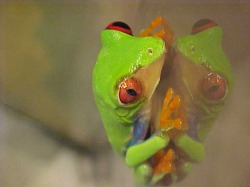 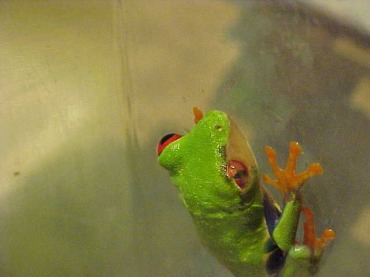 There has definately been damage to the eye.  The pupil remains fairly narrow and the colouring is currently washed out.  WEDNESDAY, JUNE 11th ~ There have been no changes that I can see today...so I am not going to post a new picture. 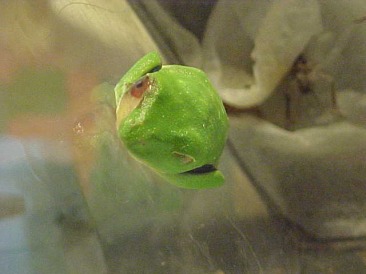 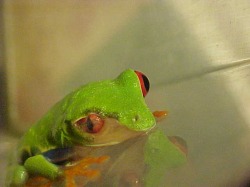 THURSDAY, JUNE 12  ~ The 2 above actually show the eye closed.  The lining there is THAT thin. 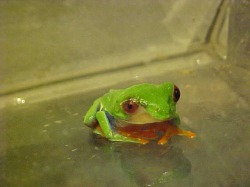 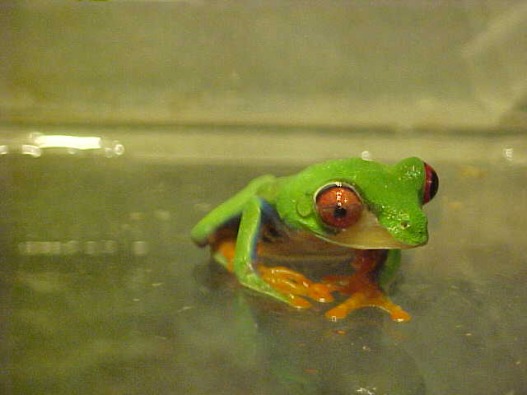 Below is Monday, June 16th. 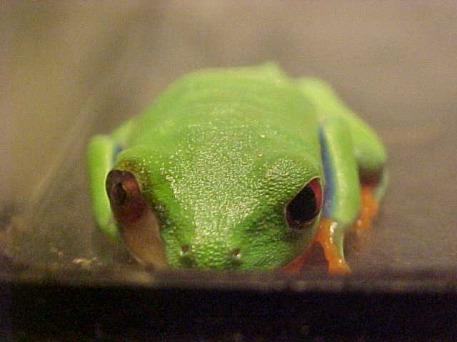 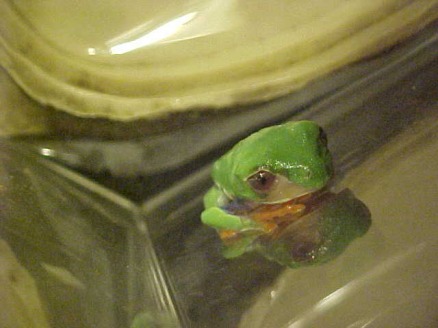 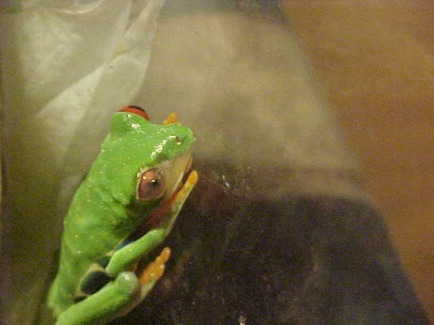 Well folks, you're not going to believe how this story ends.  I decided to give him one more day in the "hospital".  He was in a little hexagon with a plastic lid that I was leaving open an inch to let the air circulate and keep the humidity acceptable.  Guess he was feeling well enough to take a stroll.  I got to looking immediately and found him behind the 70 gallon he was on top of, but I was too late.  He had died.

To top it off I had new Saturday help, who didn't close the enclosure lid properly and lost the second one within a few days of the first.  Red Eyes are not for me.

I got some really great advice on reptilescanada.com .  So I am going to post the thread.  I should have listened a little better as I am sure that the bursting around or the eye itself was due to the aloe ~ don't use it.  The chamomile tea I have found mentioned in a few threads on red eyes, it is known to have uses in the bird worlds too.

With heartfelt appreciation to the many helping to build this site.
HOME