Hi all, I've had Yoshi, my 2.5 year old Green Iguana for about a year now and he's been in great health in that time and eating well. He's housed in a large viv (7ft x 5ft x 4 ft) with a solar glo and a ceramic spot (100w). Recently he's had issues with his dewlap skin though (see pic).

I was initially baffled and took him to a trusted specialist reptile vet. They gave him a clean check of health, and iodine for the skin issue. Since then it became clear that he had been managing to sit/ rest on the heat guards (after an acrobatic climb) which can get very hot (why, when they're meant to be guards is beyond me) and i'm pretty sure that because of the position of the dewlap in sitting, this is where the damage has come from (however this was not identified by the vet). I have since completely relocated all the heating equipment and surrounded it with good old fashioned chicken wire now. Frustratingly the ceramic lampshade has to be ~12" away for UV reasons so it's always going to be within reach (hence me not sticking it far, far away where he can't get at it).

Initially the scales/ tissue appear to turn grey before crisping and coming away (hence the little triangle gaps). He has shed slightly since it started which seems to have seen some improvment- no more tissue loss since iodine application/ moving heat guards. But the scary grey-ish areas seem to remain.... 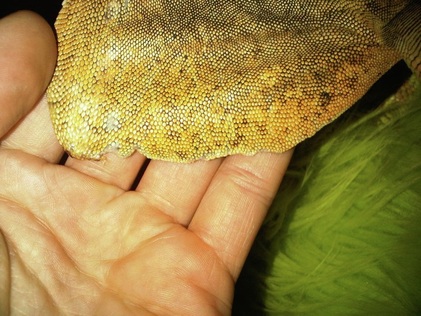 As an update this is now improving well with iodine application+ good humidity. There now seems to be some light pigment in the previously grey area and the scales/ dry damaged skin looks healthier.

Expressing our sincere appreciation to all who are helping to build this site.
HOME