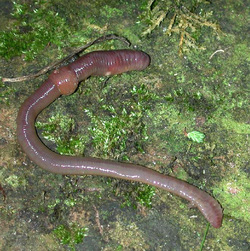 Earthworms are one of the most nutritious food items available for amphibians, and for those reptiles, invertebrates and fishes that will take them.  Collecting them (in one piece!) can, however, be frustrating, and they are quite costly at bait stores.  One trick I stumbled upon years ago has greatly simplified the task of supplying my collection with earthworms – I hope you find it useful.

I did not set out to uncover this earthworm collecting technique…rather I just realized its value gradually.  Over time, I’ve noticed that piles of leaves and rocks located on top of concrete or other hard surfaces, and separated from nearby lawns or gardens, are often home to large numbers of earthworms.

On damp or rainy nights, earthworms often leave their burrows and move surprisingly far overland.  Piles of decaying leaves, especially if located among rocks or other cover, seem to be very attractive to the nocturnal wanderers and are quickly colonized.  I believe at least some of the earthworms remain and reproduce, as I usually find numerous small individuals in such situations.  I’m not sure if the piles represent an untapped food source or are extra-rich in nutrients due to the concentration of food present, but in any case I’ve found these isolated habitats to be fertile hunting grounds.

Eventually, I began creating my own “earthworm reserves”, and invariably found them occupied within a short time.  I’ve had good luck with leaf piles (covered by wood or rocks) located anywhere from 1-10 feet of a garden or other patch of earth.  These areas will also attract large numbers of other herp favorites, such as sow bugs, earwigs and beetle grubs, and there’s always the possibility of an interesting, unexpected visitor (I found a wolf spider that was new to me this year).

I especially like the fact that, since the leaf piles are located atop concrete, the earthworms are unable to escape into burrows (please see photo of deep burrow) as is possible when collecting in more typical habitats…as all worm hunters know, the little beasts can be very quick!  Also, small earthworms, which are very difficult to locate in other situations, are often in abundance.

During stretches of dry weather, misting the pile with a hose or watering can will assure that your “guests” do not seek shelter elsewhere.

Please let me know how you make out, and be sure to write in with your own tips and ideas as well.