My passions have evolved.  This is is the site I am growing today.   We Heal the World 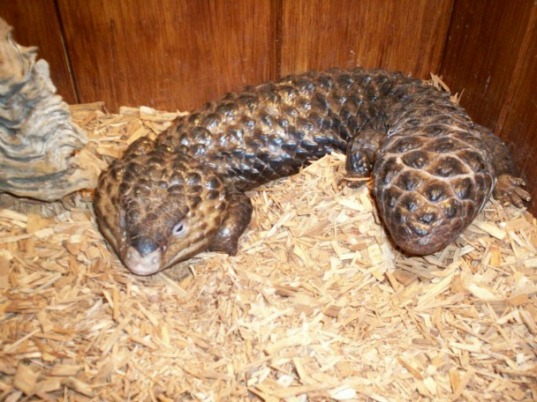 When I got my first look at this female....I thought....put some eyes and a snout on the tail end and it would look like there were 2 heads on this girl ~ laughing.  Amazing!  As are their personalities and these lizards are monogomous!!!!  ~ BAMBOOZOO 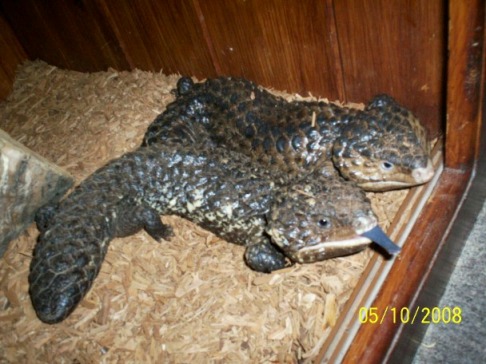 Tiliqua rugosa, Shingle-back skink, Stump-tailed skink or Bob tail skink is a short tailed and slow moving blue-tongued skink found in the drier regions of Australia. It is commonly seen sunning itself on roadsides, and has a heavily armored body and can be found in various colors ranging from dark brown to cream, even bright reds and oranges in the west.

It is also called the stumpy tail, bobtail, pine-cone, bog-eye or sleepy lizard. It has a short but wide stumpy tail that resembles another head, and may confuse predators. The tail also contains fat reserves, which are drawn upon during hibernation in winter. They are omnivores that eat snails and vegetation, and so spend much of their time browsing through plants for food.

Male and female shinglebacks stay together for about eight weeks during the breeding season, then separate. They often reunite the following year, and such pairs have been known to return to each other every year for up to 20 years. The female produces live young, one or two at a time. The young emerge and eat their afterbirth immediately. The male of a monogamous pair eats less while parenting, remaining alert and ready to give an alarm. The species was once preyed upon by dingos, Australian pythons such as Morelia spilota, and local peoples; a threat is now more likely to come from large introduced species such as foxes and cats.

The species was formerly known as Trachydosaurus rugosus. Four subspecies have been described: 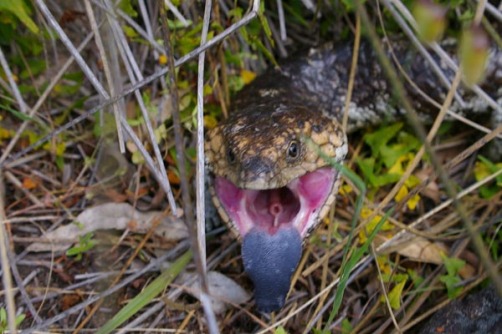 Wild specimans typically urinate/defecate when picked up as a defence mechanism, warning with a frighten gaping display.

A suitable temperature gradient for this species is:

A bright photoperiod (daylight hrs) is essential to well being as with any diurnal lizard, I use flourescent lighting (white) inside the enclosure on a timer adjusted seasonally (hrs).
I do not use artificial uv lighting excepting with hatching reptiles, but rather
ensure they get as much time outdoors as possible, keeping in mind humidity levels.
I live on the east coast of Australia and as such must keep mine indoors, however if your local climate is suitably hot and dry, an outdoor pit is preferred. 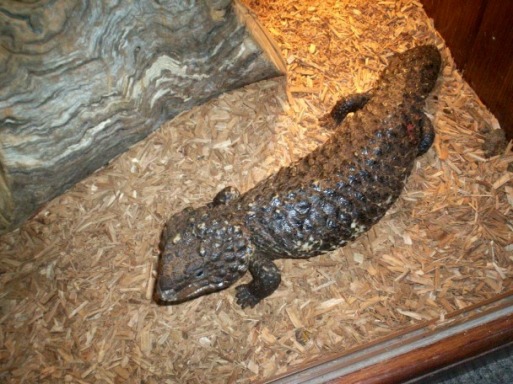 In captivity this is a very placid and characteristically pleasing lizard of comical and clumsy disposition. Handfeeding and free roaming your living room are possible without concern, making this in my opinion an ideal childs pet reptile.


Biting is virtually unknown except between males and females during courtship. A slower metabolism than their coastal cousins tiliqua scincoids (common bluetongues) means a propensity to very little most of the time
then spend several hours active having thermoregulated to optimal internal tempratures.


My pair shown above have a penchant for turning over their food plate, this species loves to dig and burrow and will do so given ample suitable substrate. They can become bored and the result is pacing at the glass (where they are kept indoors in coastal areas and southern states).  I compensate for this by providing objects for them to bulldoze around, a tennis ball is a favorite and provides me with much entertainment.   Enviromental stimuli (roaming/digging outdoors) seems to improve their disposition, without it they can often sulk for long periods and ofcourse this also provides the uv from sunlight required for the metabilisation of nutrients and vitamins.

Primarily herbivorous due to their rather slow nature, they do dig for ground dwelling insects and occasionally utilise carrion for protein.

In captivity they thrive on fresh soft fruits and greens, with incapacitated * insects such as roaches and crickets also mealworms and similar given to provide protein. Every second meal is dusted with a calcium powder.
These lizards will enjoy a frozen thawed mouse once a month to boost condition and this is useful for conditioning femals both during gestation and particularly after birthing.

Fruits and veg can include:

* insects can be easily incapacited (slowed) by chilling in a refridgerator or freezer for a minute or two.

As an arid dwelling species these lizards drink infrequently. Some keepers simply offer water for one day only every few weeks, however I prefer to provide a small container of fresh water daily. *1

This depends greatly on your specific local climate. These lizards come from hot dry areas of inland Australia where ambient humidity is generally rather low (40% or lower) and will not tolerate more humid conditions, often suffering serious respitory ailment as a result of long term exposure to higher than 50% humidity.

*1 I use a very small shallow waterbowl in the cool end of the enclosure to ensure correct humidity levels. 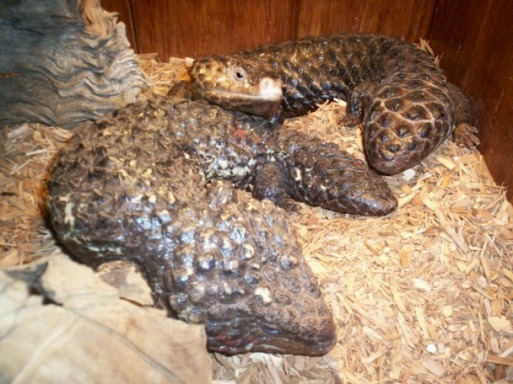 This is a remarkable livebearing species in that gestation is approximately 5 months (similar for T.scincoids though clutches for T.scincoids of up to 13-14 young are common) during which time the baby or babies are fully developed and totally independant minitures of the adults as soon as born.
This species gives birth to max 2 babies, though generally one each year or second year depending on abundance of food/condition.

"miniture" is perhaps not quite apt a description, as these babys are born up to 1/3 the size of the mother! An enormouse effort equivalent to a human woman giving birth to a 3 y.o. child!  Paradoxially, despite the independance of newborns, in captivity this species is particularly tolerant (if not parental) of their young, happy to remain housed together regardless of sex and eating from the same bowl without dispute. This remarkable behaviour makes it possible for many keepers to house the species in colonys in outdoor pits.
As in the wild however, the species bond are monogamous, meeting the same partner (remarkably) each spring for mating.

On outback roads you may often find a lone male or female reluctant to leave its roadkilled partner.


I have only recently introduced my pair and Im hopeful they will bond. So far all the signs are good and they tolerate each other. Ive caught the male nudging the hindquarters of the female recently.
We aquired this male from a collection (colony) that was sold off and sadly split up.


The female we've owned for nearly 6 yrs, she was intercepted by Australian customs in an attempted smuggling, tied in a sock inside a suitcase with 30 others stolen from wild, on her way to japan where they fetch $1000 each.  Our wildlife Authorities in each state will hold a ballot of outgoing seized natives, among licensed reptile keepers.   0We have no idea how old she is but may 10-12 yrs. She is smaller than the male as he was born in captivity and obviously fed very well during the first year of life.

OUR BEST WISHES FOR YOUR SHINGLEBACKS MATING

With appreciation expressed to the many helping to build this site.
HOME