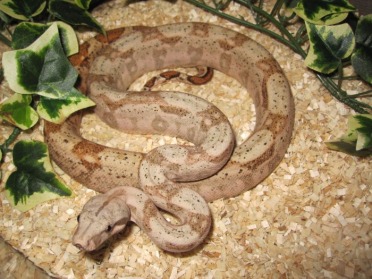 The Hogg Island Boa is also commonly known as the Hog Island or the Hog Isle Boa, and belongs to the sub-species imperator. Hogg Island boas are native to the Cayos Cachinos Islands of Santa Elena, Roatan and Guanaja and gain their name from the nickname of Cayo de los Cachinos, ‘Hogg Island’.

The Hogg Island boa boasts striking coloration, and is able to change its color according to temperature, mood, time of day and health. Exhibiting the classic boa head and shape, the Hogg Island displays attractive hues of silver and blue, or orange, lemon or pink blushes, over a cream to grey background, and has distinct orange markings, boldly outlined in black, down its tail. Hogg Islands are naturally occurring hypomelanistics. Identifiable features include heavy speckling on the snake’s body and the appearance of faded outlines around the saddles, leading to almost completely faded saddles in adulthood, due to its hypomelanism. The Hogg is a docile and calm snake, making it an ideal pet for the intermediate herpetoculturist, who wants to experience a more exotic beauty within their collection.

The Hogg Island is smaller than its relatives, the common and red tail boas (Boa. constrictor. imperator and B. c. constrictor), and reaches lengths of one to two meters in adulthood, females growing slightly larger than males. The Hogg Island boa is also a more slender, less heavily-bodied member of the imperator family, and an enclosure of one meter in length is adequate for a single fully grown adult. 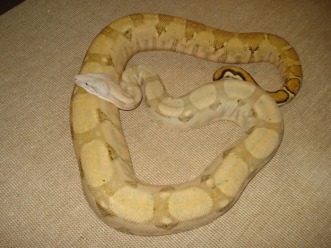 Although not strictly arboreal, the Hogg is an avid climber and strong branches will allow the snake to make good use of the vertical space provided in its enclosure. Housing can be made from wood, glass, plastic or metal, to suit your preference, but some building materials may be more suitable than others – the Hogg Island requires moderately high humidity, and the enclosure type can aid or hinder humidity levels. Some materials may also be better suited to size of the enclosure – larger plastic enclosures might not be feasible, and all-glass tanks can be very heavy, for example.

Though not the most naturalistic or aesthetically pleasing material, newspaper is the cheapest and easiest substrate option, particularly for the adult boa. It can be completely removed and replaced after each defecation or water spill. This necessity becomes more time-consuming and expensive with other substrates, however other options are also adequate and perhaps easier to use when housing neonates and juveniles. Other safe substrates include aspen bedding, wood chippings or paper towels. Dusty substrates should be avoided, as should cedar and pine as they harmful to the snake. If using a particle substrate the snake must be fed in a separate enclosure to avoid ingestion, which leads to the risk of impaction, when eating.

Cage furniture can be simple or decorative, but hides must be provided, preferably at both ends of the enclosure so that the snake doesn’t have to choose between temperature and security. Fresh clean water should be made available at all times in a large water bowl, if possible one that is big enough to allow the snake to soak in if it chooses to, however prolonged soaking may be indicative that humidity is too low. A large water bowl will increase humidity if needed, and Hogg Island boas require moderately high humidity levels, around 40-60%, which should be raised when the snake is in shed. Problems associated with dry conditions include poor shedding and dry skin. Similarly, humidity that is too high can also cause health problems, such as scale rot and respiratory infections. 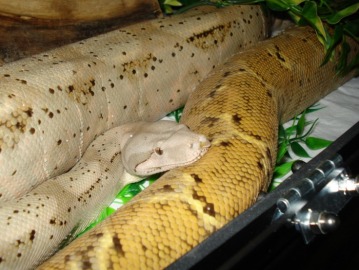 Hogg Island boas, like all reptiles, are ectothermic (cold-blooded) and are unable to generate their own heat, so a heat source must be provided at one end of the boa’s enclosure. This can be in the form of a heat pad or mat, ceramic heating element or a light bulb, which must be properly guarded to prevent burns, and controlled by a thermostat to ensure accurate and constant temperatures. Heat rocks and similar devices have been known to cause thermal burns and can be dangerous, so the use of them is not recommended. Improper temperatures can lead to an unhealthy snake. Without sufficient heat snakes are unable to properly digest food, and immunity can be lowered leading to susceptibility to disease. Temperatures that are too high can cause heat stress and dehydration. Hoggs require a basking/hot spot of around 32°C-35°C, and a cool end of around 26°C-27°C. Night time temperatures can drop to 23°C-27°C. This range of temperatures allows the snake to thermo regulate by moving around the enclosure.

A phot operiod of 12 hours daylight and 12 hours night is ample. If preferred this can be altered to mimic seasonal changes, which can be particularly useful when inducing a winter period in preparation for breeding. During winter, daylight hours can be reduced to 8-10 hours for an eight week period, which should be gradually increased back to 12-14 hours for the spring mating season. The photoperiod can be artificially provided with the use of light bulbs or tubes, or, if enough ambient light is present from windows, a natural photoperiod is adequate.

Captive bred Hogg Island boas are generally good feeders on frozen/thawed rodents. Neonates, or young boas, can be fed regularly (every five to seven days) on newborn rat pups or small mice, and will shed frequently. The amount of food can be gradually increased as the snake grows, and larger and older specimens should be fed less often, due to a slower metabolism that comes with age. An adult can be fed large rats every 7-14 days. Boas, like most snakes, are capable of eating food items which are one to one-and-a-half times the thickest part of the snake’s body.

Sexing of the snake can be achieved by external visual means, although this is not the most accurate way of defining the gender of the snake. The boa retains vestigial pelvic bones, often resulting in spurs on either side of the cloaca. These spurs are typically larger on a male than those of a female, if she possesses any at all, or if the spurs are the same size they are more strongly recurved on the male. If this feature is not able to allow you to accurately indicate sex, a method called probing can be used. This method should only be practiced by an experienced herpetoculturist, and involves using a probe to check for the presence or absence of hermipenes (the male reproductive organs). 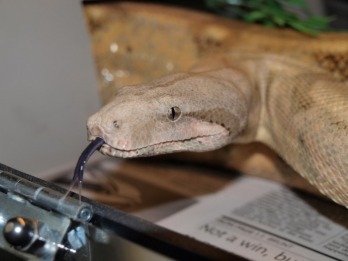 Hogg Islands, like all boas, are ovoviviparous (they bear live young), and gestation ranges from four to eight months. It is thought that they only breed once every two years, which allows the female to recover and regain weight and nutrients, lost during the fairly lengthy period of developing young. In preparation for breeding it may be beneficial to simulate natural seasonal changes, such as photoperiod and temperature (known as brumation). These changes allow the snake a rest period, signal the start of breeding season, and are thought to increase fertility levels. Night time temperatures can be reduced to 21°C-24°C, and daytime temperatures can be lowered by a few degrees, in combination with shorter days and longer nights, for two months. It is quite common for the snake, particularly the male, to refuse food over this time. One male can be used to breed with one or even a few females and it is possible to maintain a breeding pair or group together throughout the entire cooling period; however a better breeding response may be achieved when the snakes are kept apart and then introduced at the appropriate time. This also reduces stress, and newly-introduced snakes will often initiate courtship immediately. Pairs or groups placed together can remain in the same enclosure for days, or even weeks, occasionally separating and re-introducing the snakes if breeding activity is not observed. After a successful mating, females will often develop an abdominal swelling, as the mature ova are released from the ovaries, and the male boa will lose interest. Ova may be released before copulation, where they will be fertilized in the oviduct, or weeks after copulation where they will be fertilized by retained sperm. Gravid females may become aggressive and darker in color, seeking out warmer areas of the cage. The boa will become active right before giving birth to the young, and between ten and twenty neonates is the normal average for Hoggs. 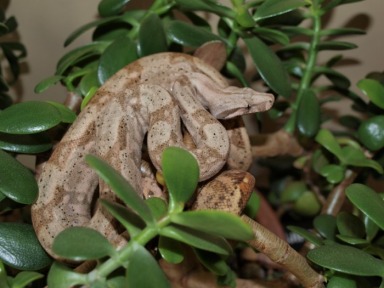 It is common for breeders, who are not interested in preserving the natural beauty and genetic integrity of Hogg Island boas, to cross-breed them into some of the red tails and common boas, to gain the benefit of the lighter coloring of the Hoggs. Cross-breeding of these rare and attractive boas is detrimental to their survival and true/pure-bred Hoggs are becoming harder to find in captivity. Cross-bred specimens are larger in size, have less speckling and overall coloration is slightly different.

"The taxonomic designation of Hogg Island boas is likely to have contributed to the depletion of these boas in the wild, as because they were considered the same species as the more abundant mainland boas, there were no restrictions placed on their collection for the pet trade. This, in combination with habitat destruction and killing of the boas by natives, has led to the devastating damage to the Hog Island’s existence.A study of Hog Island boa was conducted in August 2004 with population estimate of 10 000 Hog Island boas left on the island. It is up to us to preserve the genetic integrity of the bloodlines available. Through responsible captive breeding we can ensure the survival of a spectacular species.

Robert can be found at:  www.reptilescanada.com      aka   Robert S
RESOURCES
http://www.opwall.com/Library/Honduras/Honduras%20Terrestrial/Herpetofauna/Green%20-%20Population%20level,%20current%20threats%20and%20sexual%20dimorphism%20of%20the%20cayos%20cochinos%20boa%20constrictor.pdf#search=%22cayos%20cochinos%20boas%22
Share |