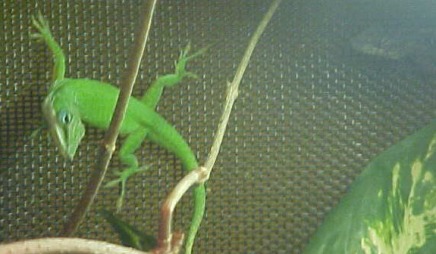 The Green Anole (Anolis carolinensis) is one of the most familiar lizards in North America. There are more than 300 species of anoles throughout the world, over half of which are found in North, Central, and South America. The Green Anole is the only anole native to the United States. Although they are not closely related to true chameleons, Green Anoles are often referred to as "chameleons" or the "American Chameleon" due to their ability to change color.

Native to the United States, the Green Anole is found in the southeastern states from North Carolina to Florida and across to Texas. Green Anoles are arboreal lizards, mostly keeping to trees and shrubs, and will find their way to fences and walls.

Green Anoles are small lizards that grow to 5-8" in length. They have a long tail, long claws, and are lighter in color around the throat and neck.

Green Anoles have the ability to change color among shades of green and brown. These color changes are not used for camouflage; they are used to reflect stress or to communicate. For example, a content Green Anole is green. When active, they tend to be bright green. When they are cold or displaying social subordinance, they will turn brown. When aggressive, they will be bright green with a dark brown patch behind the eyes.

Male Green Anoles have a throat fan, or dewlap, that ranges from pink to white in color. During courtship and territorial disputes, muscles extend the throat fan for a colorful visual display. 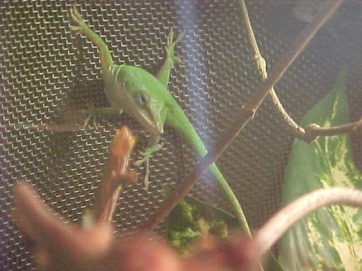 A vivarium, a container similar to an aquarium with a vented hood, is ideal housing for anoles, as it will maintain the heat and humidity required to keep anoles healthy. Generally, a ten-gallon aquarium is sufficient for two anoles. Green Anoles can be kept alone or in groups of one male and several females. Two or more males kept together without adequate space could result in territorial aggression and fighting.

The substrate, the material that lines the bottom of the enclosure, should mimic the natural substrate to which anoles are accustomed. This includes slightly dampened sphagnum moss or peat moss. The moss can also be layered over an inch of pea gravel. Another method is using one to two inches of potting soil covered with bark mulch.

Green Anoles like to climb and bask, so logs or branches should be provided. Added cover such as rocks will benefit anoles if a number of them are kept in the same enclosure. Small plants should also be provided; nontoxic plants in the enclosure provide humidity, shade, and a sense of security as well as adding an aesthetic quality. Dragon plants (Dracaena), Ficus benjamina, and hibiscus are good choices. Be sure the plants have not been treated with pesticides and the potting soil does not contain vermiculite, pesticides, fertilizer, or wetting agents. Washing the plant with a water spray and watering it thoroughly several times to the point where water runs out of the bottom of the pot, should help remove toxic chemicals, which may have been used. Keeping purchased plants in a different part of the house for a while before putting them in the enclosure will also be helpful. 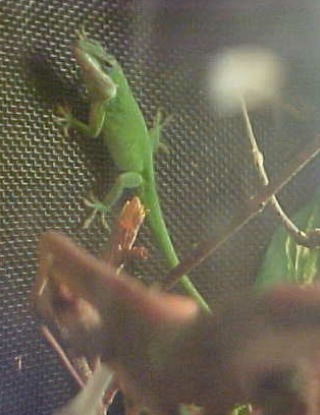 Maintaining a clean environment for Green Anoles is important. The enclosure, food and water bowls, fixtures, and landscaping pieces should be cleaned routinely to keep the anole healthy.

Temperature Anoles are cold-blooded and require supplemental heat for proper digestion. If a reptile is cold, it cannot properly digest its food and is more likely to become ill. Lizards require a temperature gradient so if they are cold, they can move to a warmer part of the cage and vice versa. Two thermometers should be used, one inside and one outside the basking area, to monitor the temperatures throughout the day and night.

A primary heat source is necessary to keep the temperature of the entire cage within the proper range. Daytime temperatures should range between 75-82°F for 12-14 hours per day. A series of incandescent lights over the cage is one of the best heat sources. At night, the temperature should not fall below 65°F. At night, these lights will need to be turned off and another heat source may be needed depending on the ambient temperature. A heating pad placed under the cage, ceramic infrared heat emitters or panels, or more expensive nocturnal reptile incandescent light bulbs which produce heat, but little visible light, can be used. For larger enclosures, a space heater or separate room thermostat can be used to keep the room at the appropriate temperature. Fire alarms should be placed in rooms where lights or other heat sources are used. 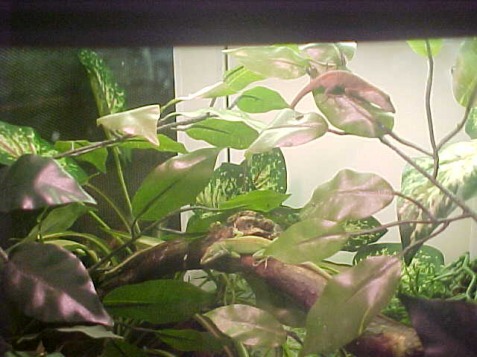 Second to the sun, the best light source is a combination of visible light from fluorescent or incandescent lights, and UVB light from special reptile black lights or combination lights. Remember that UV light can not penetrate glass, so when overhead UVB light sources are used, the top of the enclosure must be a wire mesh that is not too fine. It is recommended that the UVB light source should be less than 18 inches from where the anole spends most of its time; 10-12 inches is optimal.

Photoperiod: Green Anoles generally need 12-14 hours of light and 10-12 hours of darkness. The visible light and the UVB light source should be turned off at night to give the anole a light-dark cycle. As mentioned above, supplemental heat may need to be added.

In summary, a variety of lights are needed, some for heat, some for white light, and some for UVB light. 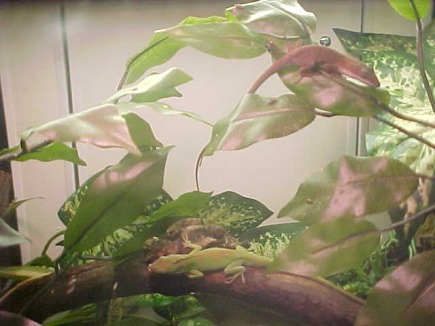 Glass cages, even those with a screen top, should NEVER be used when providing access to natural sunlight. Glass cages will trap heat and can cause fatally high temperatures. Ultraviolet light: In addition to heat and white light, anoles must have access to natural sunlight for good health. This is because they need a certain spectrum of ultraviolet (UV) light called UVB. UVB is necessary for the anole to make Vitamin D. No artificial light is as good as sun in providing UVB, so when the outside temperature on a sunny day is over 70°F, place your anole outside in a secure screen or wire cage with a locking door. Provide some shade and a hiding place within the enclosure. UV rays do not penetrate window glass so anoles placed in a sunny window are not receiving UV light. 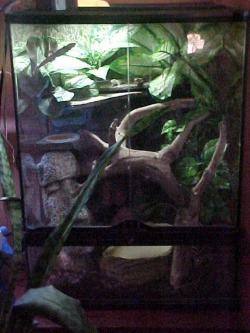 In the wild, Green Anoles lap up water from leaves. Spraying the leaves of plants in the enclosure will ensure that they get the appropriate amount of water in their diet. A shallow water dish should also be provided as they may learn to drink from it. To aid in teaching them to drink from a water dish, set up a dripper bottle to drip water into the bowl. The sight and sound of dripping water will attract the anole.

Green Anoles eat a variety of crickets, spiders, cockroaches, moths, and grubs. Anoles are primarily insectivores, so a diet of live foods should be given. The size of the food should be no larger that half the size of the anole's head. It is also important that the food given is nutritious and keeps the anole's diet balanced. This can be achieved by feeding a varied diet and by treating the foods with supplements. Supplements include multivitamin/mineral and calcium preparations in the forms of spray-ons, powders, and foods to be fed to the insects. Some anoles may also enjoy an occasional piece of fruit.

When they aren't searching for food, anoles spend much of their time basking. If housed properly, anoles will live peacefully and quietly together. Male anoles, however, display territorial behaviors when housed with other males. This behavior is usually aggressive, with a colorful display of his throat fan and the slow bobbing of his head and body. Aggressive behaviors rarely result in a physical attack but if kept in close proximity, the biting of noses and dorsal spines can occur.

Some anoles become accustomed to being gently handled, but to most anoles, handling is very stressful. Be sure the anole is used to its new home before being handled. Be consistent in the way the anole is handled and remember that it would rather hold onto you than have you hold onto it. If grabbed by the tail, an anole may 'drop it' (i.e., the tail will separate from the body, which is called autotonomy) and the tail will slowly grow back.

It is important to wash hands both before and immediately after handling anoles to prevent the possible transmission of bacteria and disease  from other anoles and yourself.
MATING

Anoles will breed in captivity if the conditions are right. Breeding seems to be affected by photoperiod, or daylight length. Increasing photoperiods in the spring and summer months along with increased temperature and humidity play a role in inducing captive anoles to breed.

Breeding behavior often mimics the behavior seen in aggressive males. This includes head bobbing, throat fan display, and other body movements. When the female is receptive, she will bow her head and the male will grab her neck with his mouth.

The Green Anole is oviparous, or egg laying. The female does not usually prepare a nest but may make a scrape in the substrate with her nose, and deposit the egg in the indentation. From late spring throughout the summer, the female lays a single egg (rarely, two) about every two weeks in a moisture-rich area. The eggs can be removed or left in the vivarium with the adults. If removed, the eggs should be put in a damp substrate and covered. They should be kept at a temperature of 82-85°F and checked weekly to ensure the substrate remains moist. Incubation of the egg lasts less than two months, about 35-40 days.

Hatchlings are roughly two inches in length. They eat much more than adults and must be given a lot of small live foods treated with supplements.