My passions have evolved.  This is is the site I am growing today.   We Heal the World
​ 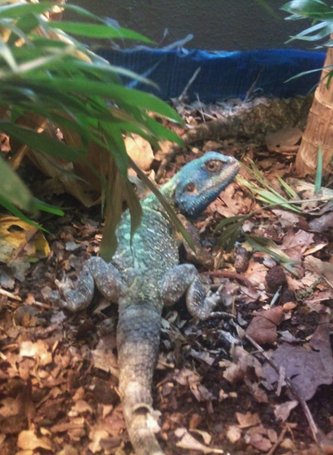 
Information for this species in captivity is very rare which has led me to writing this care sheet. These lizards are a member of the Agamidae family under the genus Acanthocercus. They are semi-arboreal and diurnal. As it stands, those that are kept in captivity come as Wild Caught (WC) or Long Term Captive (LTC Kept in captivity for 3+ months) with a few now coming through as Captive Hatched (CH). It is my plan, with a few others in this country, to get the Captive Bred (CB) population of these lizards to a level where the capture of WC individuals is rarely needed.


They live in a wide range of habitats, from forest to savannah, even living in built up areas. This species can often be found scaling the sides of trees. In studies they were found to inhabit mainly Acacia Karroo and occasionally found in Protea Caffra and dead trees.

They range across most of central Africa down into South Africa including Ethiopia, Kenya, Congo, Angola and Namibia. You can find 12 different species of Agama in South Africa and inhabiting the North of the country, Acanthocercus Atricollis being one of these.

Normally a male displaying his colours won’t be far away from several females. These lizards tend to live in colonies with one dominant male and a group of females and other subordinate males.


Males: Tend to be bigger than the females, with a large head and a broad yellow/green vertebral stripe, their main colouration being a grey/brown. They display a Blue head during breeding season, when feeding and at the hottest parts of the day. Male Atricollis have large teeth at the jaw apex this helps them to chew bigger prey. You can search for many pictures of them online showing complete body colouring they rarely reach this in captivity but do still have some fantastic colours. Their colours change very quickly due to their scaling. A full size adult male will be around the 15 inches head to tail, the tail making up more than half of the total length. Nose to vent in an adult male being 5-6 inches.

Females: They tend to be an olive colour with black marbling, the patterning on their backs being very distinctive. They also display, mainly when gravid, two series of orange to yellow dorsal spots.

When choosing a setup for the atricollis it has to be remembered that they are a semi arboreal lizard. This means that you will require a setup with both floor space and height, a space of 36x18x24 (Inches) is required for one specimen, with something along the lines of 48x24x36 being used for a larger colony.
Lots of branches are required for the species providing a large canopy for climbing. Plenty of hiding spots should be added to the setup making sure you have adequate space for them all to hide in both the warm and cool ends of the setup. Using planting (Fake or real) try to create lots of hidden areas that they can escape the light of the day in. In my own setup I have walls covered in cork bark or viv rock backing can be used to create a rock face they can climb.

A full spectrum bulb is needed for the UV of these lizards. I recommend using an Arcadia d3 12%. They have both a longer life and a far superior output compared to the competitors. This needs to go along the length of the setup trying to keep at a 12inch distance. The décor mentioned above allows plenty of hiding places to give varying levels of UV to suit your lizard’s needs.

Set a spot light on a dimmer stat on a basking spot to one end of the tank achieving a temperature near to the 100F mark leaving a thermal gradient down to the high 70 to the low 80s. Alternatively on a large setup try using an MVB (Mercury Vapour Bulb) for far superior lighting and heat.
Set lighting on for a period of 12-14 hours, depending on the time of year.

I’ve found that my atricollis like a humidity of around 65% dropping to a slightly drier area in the hot end. This humidity can go into the 70s and I advise spraying 2-3 times a day to achieve this. A good trick to raise humidity in your setup is to have a heat mat under a water bowl this evaporated the water creating a humid environment. 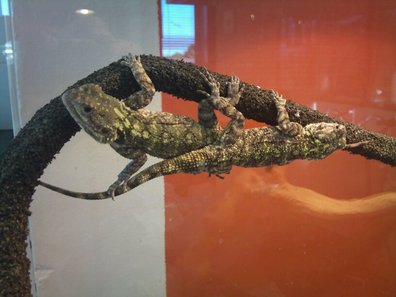 I use a combination of substrates in my setups. A drainage layer is always good in these vivs to help aid in the humidity I do this by using a layer of hydroloca (Available from most good garden centres) with a layer of permeable material to allow water to get through but stop the substrates mixing. As a substrate a combination of things can be used. I find buying an organic soil from your local garden centre the cheapest option with a layer of leaf litter and cypress mulch on top. Cypress mulch is an excellent substrate for retaining moisture and I find the komodo bags the better option. You may also want to use a layer of sand and peat in a few spots in the viv to offer variety and laying spots.

Making a live substrate: Start by using organic soils you will naturally be releasing bugs into your substrate. Add to this some mealworms (Tenebrio molitor), mealworm beetles, Morio worms (Zophobas Morio), tropical springtails (Folsomia candida), tropical woodlice (Trichorhina tomentosa) and earth/tiger worms and you create a live eco system that will clean up any mess that you atricollis leave behind. Throwing in some leftover vegetables (make sure it’s safe for your atricollis) will keep these fed and spray in the corner of the viv to give them a damp spot. This will give you a live culture in your substrate that you shouldn’t have to clean. This also gives your atricollis some chances of hunting and foraging for food.

You will find your atricollis have a spot they like in the viv, the male normally taking the best spot. They tend to pick a high warm area where they can look over the other occupants. They require the heat of the day to be able to move about so you will find them basking early on and normally more active in the day. This is when you will find them showing their full colouring.

A humidity of 65% is best when shedding occurs. The atricollis sheds roughly every few months at this time make sure you spray well, spraying the entire lizard to aid shedding.

The atricollis can be fed a wide variety of invertebrates. In the wild they feed mainly on termites, ants and winged insects like grasshoppers. Atricollis are one of the few lizards that can handle the acidity of ants. Unlike some of the other agamid species though they don’t live entirely on ants being more of an ambush species feasting on whatever insects they see.

In captivity try to feed a wide variety of gut loaded insects. They will eat locusts, crickets and small roaches as a staple using Dubia (Blaptica Dubia) or Turkistan (Blatta lateralis). You can also, as a treat, feed them wax worms, mealworms and butter worms (Chilecomadia Moorei) . Morio worms can also be fed as Atricollis chew their food more than most species so the size of a Morio isn’t a problem. They also like beetles and the beetles from mealworms are a favourite of theirs.

The atricollis has been known to take veg try them on some kale or rocket you may find they will eat it.

Our sincere appreciation to all helping to build this site.
HOME