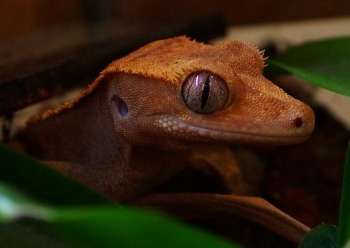 Clamps ~ the resident, Photo by Lotte aka saedcantas on R.F.U.K.
This is my crestie viv build. There have been a few posts recently with people wanting to know how to build more natural looking planted vivs for tropical species, although the plants in this viv aren’t strictly the plants that would be found in a crestie’s natural environment, the main reason for this is that this was built for Pumilios, but as we live in Jersey, and are at the mercy of the local reptile shop, (which is crap), this never happened. The viv was built and stayed empty for a year before I spotted an add for cresties in the classifieds, and thought, hello, I might have a home for one of you.

So although the plants aren’t strictly correct, they do look the part. The other thing to consider is what will survive.

So this is what we, (me and my o/h)  (O/H = OTHER HALF), had to work with, as this was my first viv build, there were a few things I didn't think of when I built it, so I will let you know what I would do differently when I come to those bits. 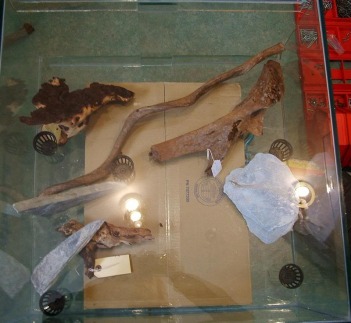 It’s a 24”x12”x24” fish tank that a mate gave me, the only real problem with it is that as it’s so tall, and the only way in is via the top, it is difficult to reach the floor.

So here it is laid on it's back with various bits and bobs laid out. What I would have done differently is to cover the back in silicon as opposed to spraying the expanding foam straight onto the glass. 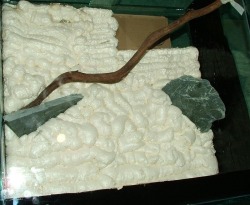 You can see how we changed our technique in this pic, bottom left is how we started, and then as we moved up, we made the foam more dense, we needed two and a half 750ml cans to cover it. What you might also want to do is use a gloved hand to mould the foam as it drys. 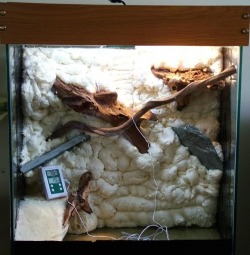 This is the foam complete, the thermometer is sitting on a cave that I had built as a hide, but obviously the crestie wont use it.

In this pic I am testing out the lighting and heating.

Ok, where were we?

Oh yeah, the fun bit...Not! The siliconing of the back. 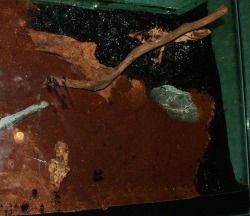 This is the bit I hate with viv builds like this, it's messy, it's smelly, and it seems to take forever, I only gave it the one coat, but I have heard of people giving it two coats, I'm not sure if this is strictly necessary, but I supose it wouldn't hurt if you have the discipline. 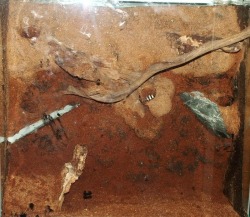 However I do like putting on the eco earth, there is a "job satisfaction" to it, after all the "unnatural" expanding foam, and then the silicon, It's at this point that you can see a viv taking shape!

On this build I made the eco earth too wet, and didn't give it enough time to dry out, to be honest I thought it had to go on fairly wet, but now when I make a batch of eco earth, I use very little water, and then leave it for a week, this means it should be almost completely dry. On this build I put the earth on and brushed off the loose earth almost straight away, now though I tend to throw on handfuls of earth, and then leave it over night, more stays on this way I have found.

The last thing to do is clean off all the silicon that is on the glass. 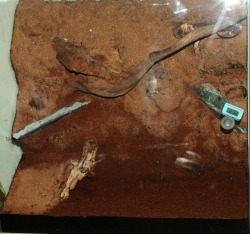 Ok, I was going to start with the lights heat and ventilation tonight, but I've changed my mind. Now now, It's my viv build thread, I can do what I like

So instead we will look into some plants, most of which will die, DOH!

So the first thing to do is put in the Leca, about an inch, this is why I put a 2" line of silicon at the bottom of the viv to hide this from view , next to go down was a layer of weed netting, and then finally the eco earth, (about an inch). 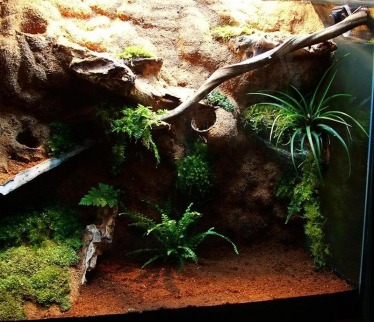 So here you can see some plants, and moss, everything died except the brom up on the right,

If anyone knows how to grow moss I would love to know the secret, as I have tried in two vivs now, and I can't get it to last more than a couple of weeks. 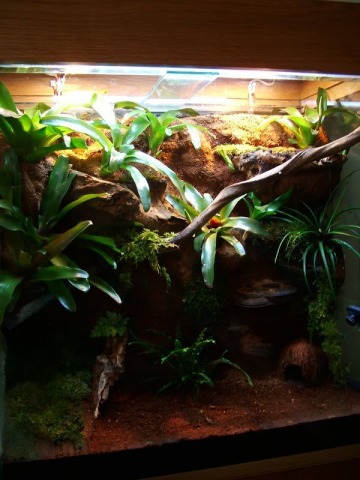 So in went more broms, they are still all alive and kicking 18 months later .

Heat/lights/ventilation, lets start with the heat. the only source of heat for the viv are four 20watt halogen lights. In the beginning I fitted two of these lights, but the first winter in my flat told me that this wasn't going to be enough, I was going to put heating cable in, but I was told it wouldn't be needed as "room temps" would be fine, however the person giving this advice (my girlfriend, the person helping me with this build) hadn't spent a winter in my flat to see just how cold it gets.

So here it is when it had two lights; 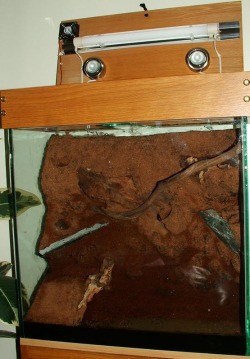 With hindsight I would have fitted the heat cable, as I always say, "It's better to have something and not need it, than to need it and not have it". I fitted heat cable to another viv I built, and the cable on it's own was able to get the temps up into the 80f range with no extra heating, plus as the heat is coming through the wet eco earth, this brings up the humidity nicely .

But as it would have been a major pain to retro fit the heat cable, I put in two extra lights instead. This, along with the exta vivs we now have in the lounge, means that I can get a good 78f in the viv, even in the winter; 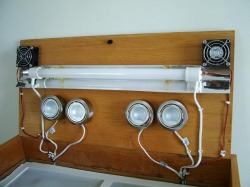 Next, lighting, apart from the four halogens, there is a 10% repti sun tube with reflector for uvb. I will be upgrading this soon by fitting a 15" 2% tube in-between the two fans. I'll post pics when it's done.

Now obviously we don't want cresties getting up into the lighting, so I fitted a screen, I used net curtains as this viv was going to house frogs, and the normal netting you can get from the reptile shops lets the small flys you feed frogs with through
And as net curtains only blocks about half the uv, and ALL flies, then this is what we went for. 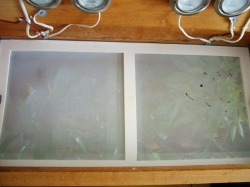 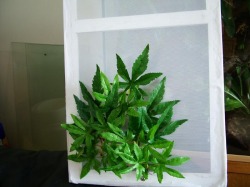 Now the ventilation, I fitted two computer fans, one sucks, one blows (fnaah). The vents do a number of jobs, one, they circulate the air, pulling out stale air and replacing it with fresh. Two, they help circulate the heat. Three, they prevent the glass from misting up. 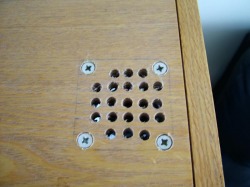 To get the air in and out, I drilled holes in the lid. The fans were then screwed to the underside of the lid. 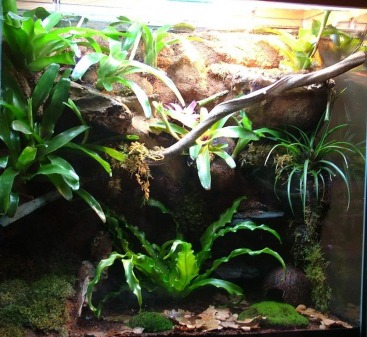 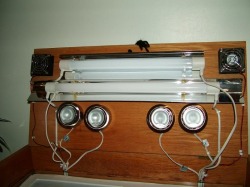 I put this in for the benifit of the crestie, but I didn't know that it would be the broms that would appreciate it more, they had gone a dull green, but within a week of the light being in the colour is coming back. 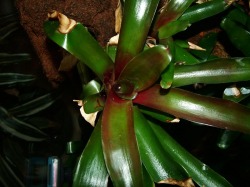 You can see the pink in the centre of the plant has come back, this had all but gone. We had some more colourful broms in here before, but they died, now I have this tube in I might get some more and try again 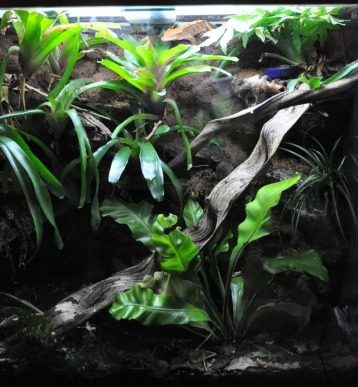 On behalf of our readers here at the bamboozoo, thank you for sharing Jay.
Jay can be found at:  http://www.reptileforums.co.uk/ 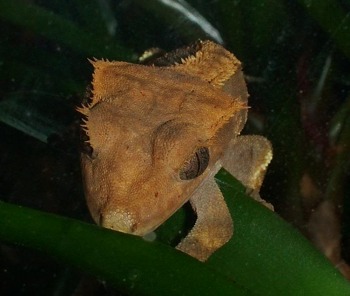 Clamps the Crestie Photo by Lotte aka saedcantas on R.F.U.K.
Share |