Cicadas – An End of Summer Treat for Pet Reptiles, Amphibians and Invertebrates 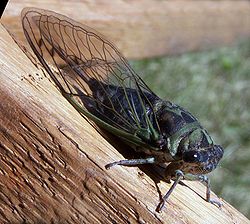 WRITTEN BY:  FRANK INDIVIGLIO
ThatReptileBlog
As summer winds down, resourceful herp keepers are presented with a unique opportunity to treat their pets to a novel food item – providing, at the same time, a source of important nutritional variety. The waning days of summer bring with them the annual die-off of untold millions of large, juicy insects – the annual and periodical cicadas.

More than 100 of the world’s 2,000+ cicada species make their home in North America, and they are widely distributed. I still hear them regularly in the heart of Manhattan, and various species are quite common in and near other large cities as well. Most have a life cycle of 2-8 years, but 7 species in the eastern USA have a 13 or 17 year cycle and a number reach adulthood in 1 year.

The entire cicada population of a given area expires within a short period, usually at the end of August or in early September in the northeastern USA. This yearly event provides a bonanza (up to 1.5 million periodical cicadas may emerge from a single acre of soil!) of nutritious food for a wide range of creatures – deer mice, wood turtles, box turtles, skunks, flying squirrels, black bears and a host of others have been observed gorging on cicadas. Even adult copperhead snakes, not normally thought of as insect eaters, partake of the feast.

If you are alert at the right time, you may find hundreds of these normally arboreal songsters, spent and about to die, on the ground. Your medium and larger sized reptile, amphibian and invertebrate pets will consume them with gusto, and you can freeze the excess for future use. Cicadas occur on every continent except Antarctica, and pets both native and exotic – American bullfrogs, African mud turtles, red-kneed tarantulas – unfailingly attack them with gusto. You can also collect the nymphs as they emerge from the ground in early summer – this usually occurs at night, and often within as short period of time as 1-7 days.

Dietary variety is an important key to keeping your pets healthy and in breeding condition. Those of us who keep insectivorous herps and invertebrates often face limited food choices. The annual cicada die-off may provide a relatively easy way for some of us to remedy that situation.

One word of caution: I have noticed that populations of annual cicadas near NYC have seemingly declined drastically in recent years. A colleague suggested that the insecticides sprayed to control mosquitoes bearing West Nile Virus may be the culprit. I tend to agree – cicadas, with their largely arboreal lifestyles, are easy targets for insecticides sprayed from airplanes (far easier targets than mosquito larvae, which seem as common as ever). I have not run into secondary poisoning problems when feeding cicadas to captive animals, but suggest that you do not collect in areas that have been commercially sprayed.

Please pass along your own ideas re alternate food sources for insectivorous pets. Thanks, until next time, Frank.
Share |