This little one has remained very skittish.  Has been here for 5 years now.  The iguanas of different species would not live together, though each has lived with other species without many issues, for this little one, none.  Very quick to hide this girl adapted best with a bearded dragon whose calming influence helped in relaxing her.  The iguana needs a higher humidity and I often sprayed her down.  Provide as much distance between them and you as possible with lots of cover to help them adapt.  They are very nimble and will enjoy rocks, trees, branches and will reward you with their antics. 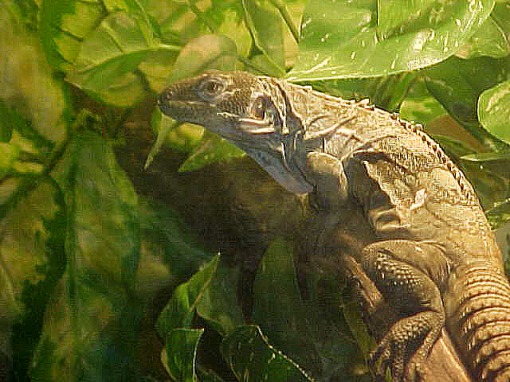 She has had many environments here.  Though for this species I do recommend as few changes and as much consistency as possible.  I call this girl Eny.  (nervous energy).  When I started this page she was housed in a 70 gallon tall which was a mistake on my part.  I should have known better as this tank sits on the wall intersecting the dining room, kitchen and livingroom.  Too much going on around her.  Her appetite didn't wain.......her exercise level was up with all the diving for cover she did. 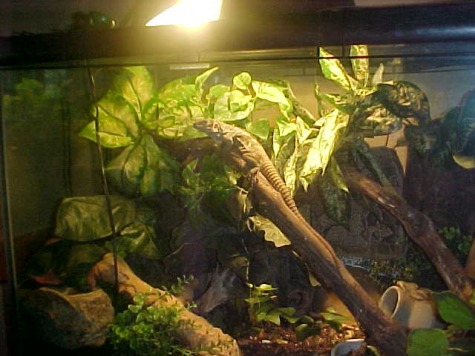 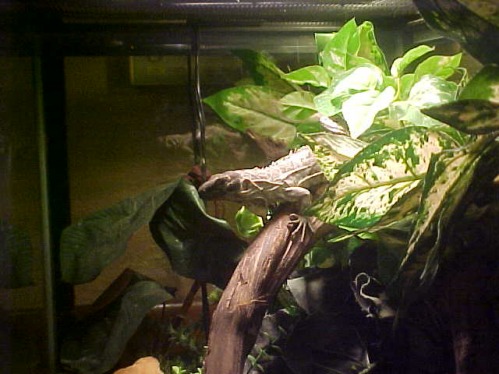 Since she has enjoyed and manages to stay healthy when out I have given her a freeroam situation in the backroom.  It is a space that she can have the most distance from people and is developing a sense of security.  She is quite often found in the large cactus, yet hasn't gotten pricked that I have seen.  She basks along the window which has a MVB above it.  Her water comes from the pond.  I feed her once a week to give her the supplements she requires and her veggies, which she has not been too fond of, but she is very good at keeping herself fed.  As you can see in the photo below. (We always have escaped crickets here.) 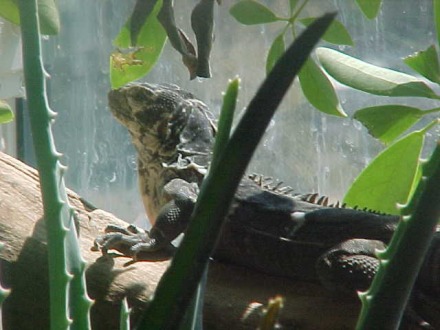 I actually tried my big girl in the free roam environment as she was in need of a larger space, more than any other reptile here.  For a minute she seemed to be doing very well and adapting.  Basking within a few hours and remaining in the space.   She did very well for approximately a week, got to wandering and never came back.  I searched for 5 days, finally finding her in behind the large living room tank........back to 4 walls for her.  She was incredibly hard to catch.  This girl was rehomed to another place that could offer her a 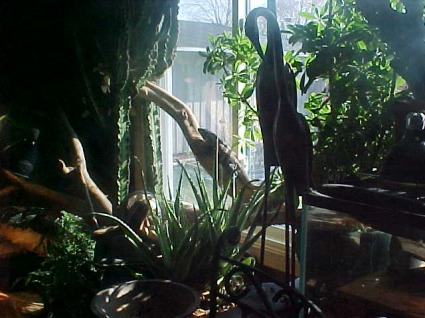 This girl is also 5 to 6 years of age.  Purchased at the same time as the smaller.  I had purchased 2 but had to let the other go when they would not reside together.  Both were females.  Both have also laid infertile eggs.  She dives whenever I have work to do around her still.  Including putting the food bowl in though she is back out within a few seconds when she sees her bowl.  She is very good about eating her veggies and rarely is given any sort of insect or rodent. 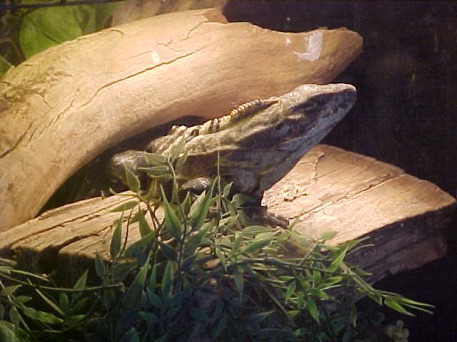 Busy Lizzie no longer lives in cohabitation settings.  She is an aggressive eating machine but I am unable to take her out of the environment to feed her.  She has also been known to escape if the lid is left open for a few minutes.  We have never lost her and usually she is recovered within a few hours.  She is larger and clumsy and we are led to her by the crashes and scuttling.  Again, a very hardy girl who has had no health problems.  Our girl is about 2 ft. in length.  Very small on the iguana scale.  I love knowing her but not a species I recommend if you are into handling your reptiles. 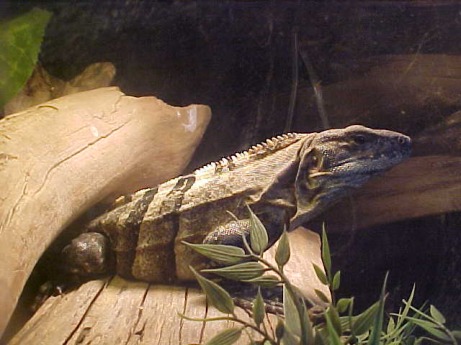 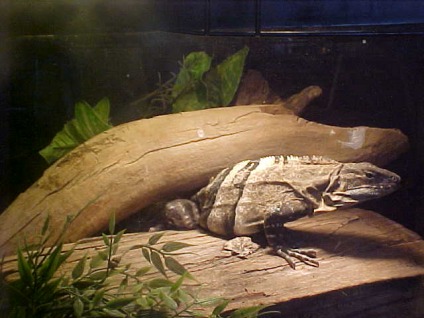 She can actually pull in that belly pretty good when she is about to get disgruntled with the camera.
Below is her former home.  She is now residing in the large hexagon.  It too gives her more privacy.  Located in the corner of the living room which is empty except for a couple of hours a day.  Rarely does anyone or thing pass by within a few feet and the 3 foot depth gives her a few extra options for hiding.  She is kept on a dirt floor with leaves added in.  She loves to dig and I allow her that activity.  Also gives me a little more distance from the SNALTING.  (sneezing excess salts) on the glass. 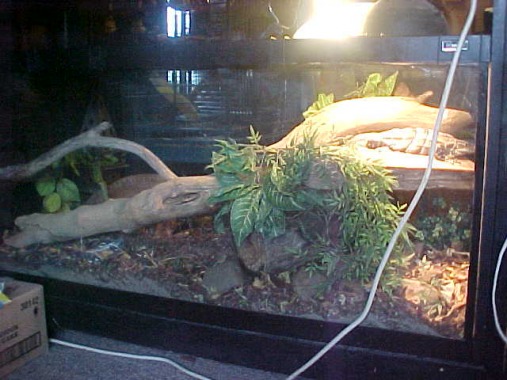