THE VERSATILITY OF THE GIANT DAY GECKO 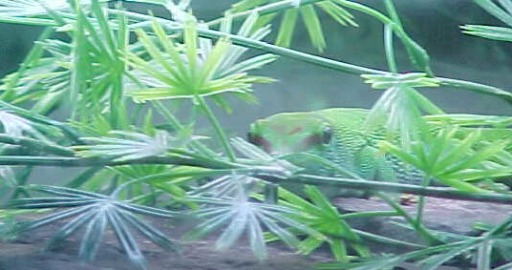 Our giant day gecko has adjusted to many differing situations.  I have never seen him go on a hunger strike or be stressed to the point of affecting his health, regardless of what I have put him through, or what he has put me through.

Beck arrived here through a pet store as a wild caught adult.  He had lost his tail right up to his behind and was looking rather ugly.  The reptile manager asked if I would take him at half price.  I have learned that when buying a species I have never worked with before to purchase an adult or older juvenile.  There is much more time to figure out what the problem may be if there is one.  If you have purchased a baby who isn't eating for you, your time is very limited to find the solution.  Beck has never given me any concern in his years with us.  Giant Day Geckos are also pretty safe when they escape as they will stay high on the walls, hiding behind pictures, clocks and safe from other household pets. 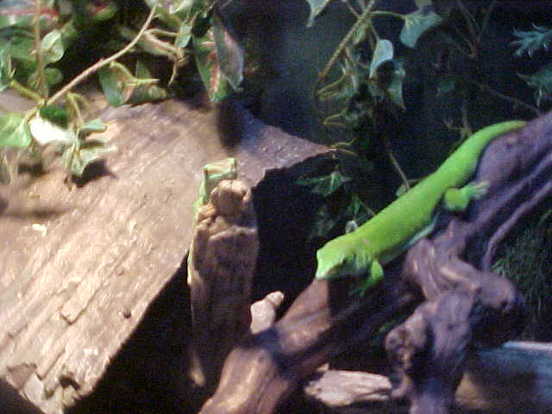 Beck has lived with a female Day Gecko without much success.  They were together less than 3 months.  Even placing them in a 2 by 3x 3 ft didn't give the two enough room not to argue and he usually came out on the short end of the stick, ending up with patches of skin torn off from the mate attacking him.  After he was the brunt of a third bite I separated them.   Below you can see the damage she inflicted to his side.   I must say the environment above was a wooden cabinet with a large front panel.  When the day geckos were in this environment they were rarely on the walls or glass.  If your gecko is on the glass more than on the furniture, adjust their environment.  It is not a natural behaviour. 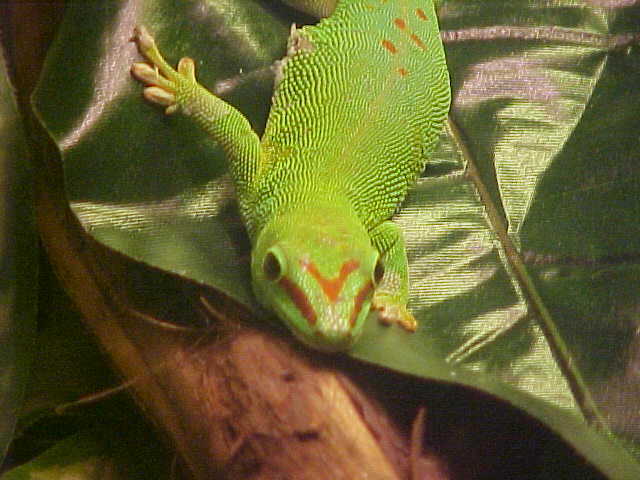 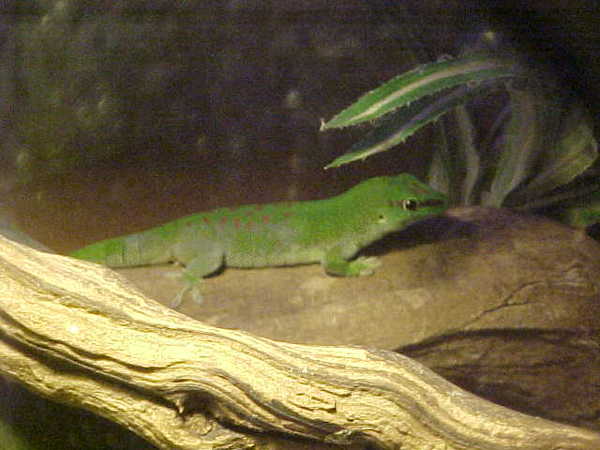 Beck peels like a banana and has never had a problem....though the female came here because her previous owner could not get her shed under control.  In the photo above you can see that although her lower body wants to shed her upper is no where near ready.  You can also see she has an extra layer still on her toes from the last shed.  Her tail was very dry and came off in little tiny pieces.  I put her in with Beck but that did not solve the issue. Same environments, same diets and humidity  but it did not work for her.    Always remember that your reptile is an individual.   I have found the female has a need for a higher humidity level.  Within about 6 months it was under control.  see more on this issue  The female was here for approximately 2 years.  The first year we worked out her issues and when there was not a repeat she found her new owners.
Beck has lived in the 148 gallon He is somewhat intimidating to the golden gecko and when they run across each other will head bob......just to say get out of my way I want to get by you. Beck is actually very polite and will approach to within a couple of inches and wait patiently until the others move.   Even in a 5 ft x2x2.5 ft space he is around that space 5 to 6 times a day.   His choice of room mate might be a cooperative Veiled Chameleon, Anoles, Rainbow Skink, Chinese Water Dragon.

I used to panic if he got out.  I tend to do all my rearranging of environments without actually moving the animals and escapees are fairly common here as their furniture is right to the top. In the 148 gallon he would be seen going around the vivarium 5 or 6 times a day.  When I saw who he was outside of the environment I never felt good about putting him back in.  Eventually, we adjusted to him living on the walls.

He stays in great condition.   During the time he would make his way to the pond for water, heat, sun,  plants.  For humidity, home base was behind a picture upstairs a couple of feet from the bathroom.   He knew where the crickets and worms were kept and raided the boxes when he felt like it or I would feed him a worm or two when he was within reach.  I also left on top of one of the other vivs he visited his honey and baby food mixture with vitamins.  (Eventually the gecko mixes became available for use.)  Sometimes he would even go home for a day or two.  (At that time he was housed in the 6 ft when standing on end.)  He could also slip into the 110 gallon and visit there for some sun.  We rarely went a day or two without seeing him and it was easy to keep an eye on his condition.  That is what I call an extreme hardiness factor.

To catch the Day Gecko I use a large plastic container.  Place it over top of them and slide the lid along the wall until they are forced to move into the container.  That way I am not going to damage their skin or lose a tail.   This is a good way to catch any prone to dropping their tail.


They are findable when they escape.  They are hardy enough to survive their attempts to experience freedom.  They are versatile room mates whose appetite gets them through new situations.  They are active and their personalities are excellent.  They are a display animal only and adjust to well in planted vivariums.   The larger the better.  Beck wanders all of the main 2 floors.  If your set up works for them....there is little to do but feed them.  They are professionals at being beautiful.

If there was one negative ~ they like to come to the front of the vivarium to eliminate.....and they like to do it 10 minutes after you have cleaned the glass!  But that also means that they are not spreading feces throughout the environment.
Beck with the female. 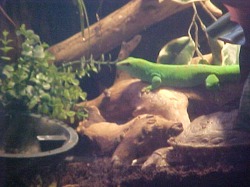 Beck with the wood turtle.
Below, with a skink. 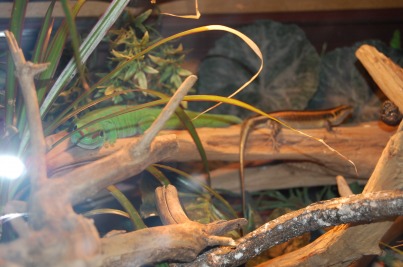 When I see trouble I rework things quickly.  I always have plenty of spare, smaller aquariums sitting around.  Though at this time my lights are stretched to the limit.  Beck has taken the pressure of the additions with grace.  He isn't fond of anything larger that is quick moving though he handles the anoles and skinks well.  He wasn't fond of the emerald swifts though.  Basilisks are therefore not his thing either.  He has lived with the green basilisks for a short time ~ not to his liking.  He has lived with B&E the water dragon well.  He seems neutral about the rainbow skinks.  He is cool with the anoles and has never tried to taste one.    Nor did he touch the  green tree frogs.  These are true insectivores.  Beck though, doesn't understand why the frogs don't move out of his way, everyone else does.  I am sure he can see the little heart beating.  Nor do the frogs attempt to move.  Impasse, for a few minutes, then Beck simply goes around them. 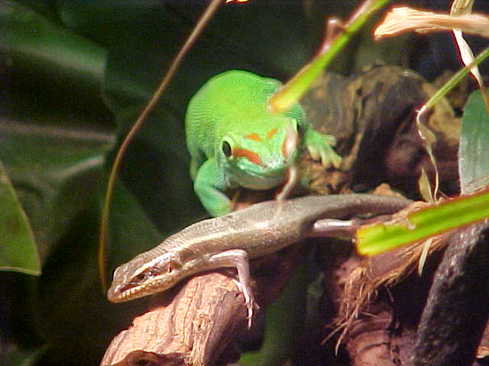 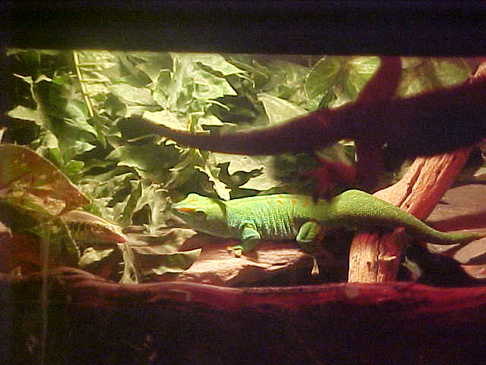 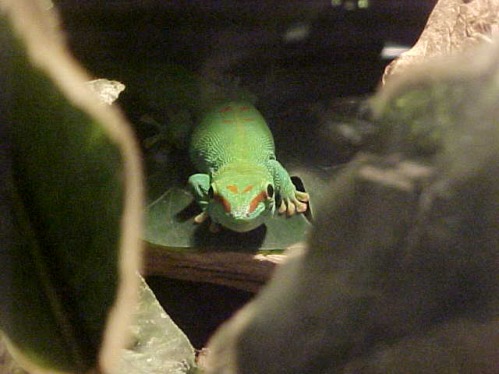 One morning I found him in the middle of the upstairs stairway.  I started him on an electrolyte but he died within a few hours, age unknown, somewhere over 12 years.  He was one of my best friends.