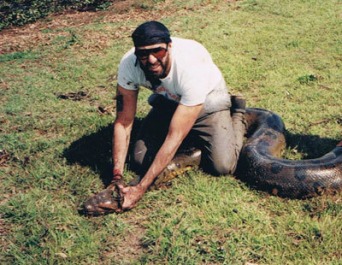 WRITTEN BY:  FRANK INDIVIGLIO
ThatReptileBlog
Growing up near the Bronx Zoo, I became fascinated by giant snakes early on, as these magnificent creatures were always featured prominently in my favorite building, the Reptile House.  So it was with great anticipation that, after some years as a reptile keeper for the zoo, I set off for Venezuela to assist in fieldstudies of the green anaconda, arguably the world’s largest snake.

Accounts of what I observed and learned during three visits to that country’s central llanos area (seasonally flooded grasslands) would fill several books.  I would like here to just give you some facts and photos – in the future, I will highlight some of my experiences in longer articles.

Despite long-standing legends to the contrary, (and, recently, a plethora of internet photos) there is only one reasonably reliable account of a snake measuring over 30 feet in length (I’ll cover the details of this and related stories in the future).  In fact, the Bronx Zoo offered a cash reward, established, as legend has it, by Theodore Roosevelt, for a living snake in excess of 30 feet.  That reward, now withdrawn, stood uncollected for nearly 100 years (I was involved in the last attempt to collect it – please look for details in the future).

The snake you see pictured here was the largest that I and my colleagues encountered.  It measured just over 17 feet long and weighed 215 pounds.  As you can see from the close-up of my hand on its head, she (all anacondas of this size are females) put up a quite vigorous battle when captured – indeed, one of her teeth remains imbedded in my wrist till this day as a reminder!  A number of the 500+ green anacondas that were marked during the study were in the 15 to 16 foot range.

I was fortunate to come upon quite a few anacondas in the process of feeding upon a wide array of animals, including capybara, caiman, jacanas and other birds, turtles and, most unforgettably, a deer of 60 pounds in weight.  Please look for future articles on the details of these most fascinating encounters.

The Venezuelan llanos, especially in the dry season, offers a wildlife-viewing extravaganza that is difficult to put into words.  Encounters with crab-eating foxes, freshwater dolphins, giant anteaters, armadillos, electric eels, caiman, scarlet ibis and countless other creatures large and small are all but guaranteed.  Cougars, jaguars, giant otters, tamandua, tree boas, tegus and a host of others are also a real possibility.  I am planning to write an article for people who might like it explore (and “exploration” it is, in the true sense of the word) this area – please look for it in the future. 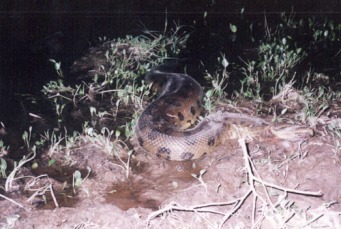 Thank you, until next time, Frank.


You can learn more about the field research project I described in this article at: