148 gallon  (560 litre)
advantages and disadvantages in the system

Excuse the glass.  That of course, would be the Giant Day Gecko. 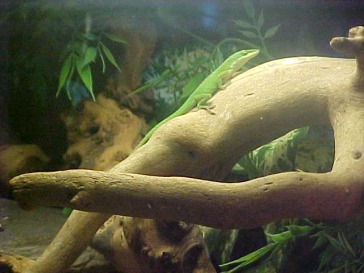 I recently tore this apart to get out the little green anole who had lost his tail.  It may have gotten caught or perhaps I waited too long before moving the Bibrons.  There were no other marks on him, so I will assume it was not a fight with the large brown anole.The soil is very alive.  Beetles, dew worms, snails, mealie worms, a few baby crickets ~ though they likely don't last long in the dampness.  There were also a few small escaped composting (red wigglers) out and around the container that seems also to be doing well.

The baby wigglers are likely escaping by going through the holes I placed in the bottom.  And working to keep the bottom floor cleaned is also the wood turtle who is constantly digging up the top two inches.  Though I do wish he wasn't quite the size he is.

The wood turtle pretty much owns the bottom floor with the exception of the fire bellied toads.  There appears to be 3 of the original 4.    The toads were some of the original inhabitants.  I believe this has been up and running for closing in on 4 years.   The skinks drop down occasionally to that level.  The toads territory is behind the pond and the back half of the pond itself.

The tree frogs are nocturnal.  By daylight they have found their sleeping spots and don't move for the day.  Though they will bark occasionally during the day.  (When they first started barking it drove my Staffie crazy, trying to find the intruding dogs.)  They also bark at the parrots and the vaccuum.  They stick to the walls, large leaves, even under the rim during the day....or sometimes they will stay out in plain site.  Under the basking lamp even.  The tree frogs own the environment at night.  And I have been really pleased by their growth.  We started with the tree frogs 8 months ago and none have had any health issues to date.

The two skinks will get to head bobbing and chasing each other fairly often.  Once in a while they will do so at someone they don't want to share their rock with.  It is much more display than anything serious.  Though they do usually manage to get their point across.  These 2 are the most active in the set up and like the Giant Day Gecko use all of the space available to them.  They, 75% of the time, will be basking at opposite ends.

The anoles share territory with the skinks, but with many more options due to their slight builds.  They use the more delicate pathways that the skinks are too heavily bodied to use.  Also very active, but housing green and browns is complicated and quite often can get serious.  These are very brave little guys and will display mightily at a disturbance in their vicinity.

I have found the Golden Gecko very shy in these surroundings, as is the Fat Tail Gecko who has lived in there all her life.  Mostly my fat tail can be found in the upper rocky corner, close to the heat lamp, but always hidden under cover.  I always make sure I throw a few crickets into that area directly.  The golden gecko stays along the back or right side wall.  Beck does head bob at her to get out of his way.   She cooperates. 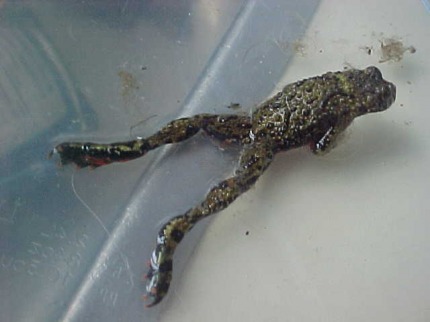 This would be the missing 4th Fire Bellied Toad

When I tore apart the environment, 12 days ago now, I found only 3 of the Fire Bellies.  I found this little guy on the dining room floor, 10 days afterward.  Covered in dust bunnies, feathers and assorted other debris.  At first look I thought it was dead.  But when I picked it up it was warm and soft so I placed him into a container with some shallow water and electrolytes.  Within a few seconds he was slurping water down.  I very soon noticed that he was not moving his back legs and thought wow, now I am dealing with a parapaligic toad!  For a couple of days I kept him in a "hospital" enclosure of only 1 gallon size.  Starting the daily chores, I went to get him first ~ Gone! Vanished! Completely perplexed!  There had been no lid on it.....wasn't necessary, he couldn't climb.  But I got to looking and within a few minutes found him covered in dust bunnies again.  Hopping around.  Paralysis completely gone!  Unbelievable!  And a happy ending to his adventure. 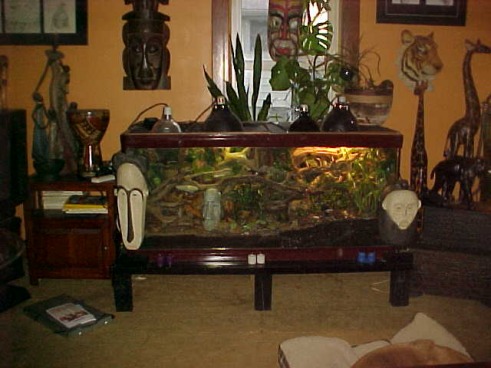 One of the biggest challenges is to keep the water clean.  Though it likely only holds a couple of gallons of water I have a fluval submersible 2, with charcoal, sponge and amonia remover flowing through it.  I use a waste remover about once a month and also use GSE (Grapefruit Seed Extract ~ many uses, but for this case it is a bacteria remover).  I use one or two drops on a monthly regime.

Keeping the water very clean while creating conditions favourable to the toads is difficult.  There is a small amount of duckweed and an areating plant and stone in the water.  The wood turtle doesn't seem to get in much and for very short periods of time.  On a twice a week basis it has to be topped up with a quart or two of water.

There is a moonlight 75 watt bulb close to where my fat tail stays and this gives everyone who would like a little extra heat at night this corner, to find.  This corner is much dryer.  I also leave it on during the day.  There is a 100 watt basking bulb on the right hand side above the water, keeping its temperature higher than it would otherwise be.  It also helps to increase the humidity.  The third light is a 50 watt directed right to the bottom of the tank.  There is also a 4 ft UVB towards the back.  There is not a cool end except in the evenings.  Instead, it works from top to bottom.  The top basking areas reach into the mid eighties.  The base runs 74 to 76.  Once or twice a week I will use a fogger but also generally create a rain storm once a week.  I will also purposely overflow the pond when refilling it to help clarify the water and add moisture into the rest of the tank as well.  I will also take it through little dry spells to avoid molds.

Although I keep trying plants in here, it is with little success.  They do get trampled and the wood turtle has turned it into an almost impossible task in the size I am working in.  But I haven't given up the fight yet.  The next step I am looking to accomplish here is a permanent misting system.

The substrate hasn't been changed in 4 years, though I do add to it.  Leaf litter, grass cuttings, dirt when changing a plant, etc.  (This substrate is still original from 8 to 10 years ago.)

Maintenance time is minimal, though when it is time to thoroughly do something here, it is a major job.  Rearranging things can take up to a couple of hours.  On a weekly basis I clean the filter, wipe the glass, wipe off stones and wood, and feed them.  I no longer purchase foods for the toads and frogs.  There is a variety of bug life in the tank. 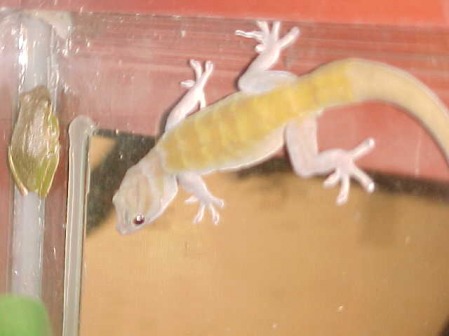 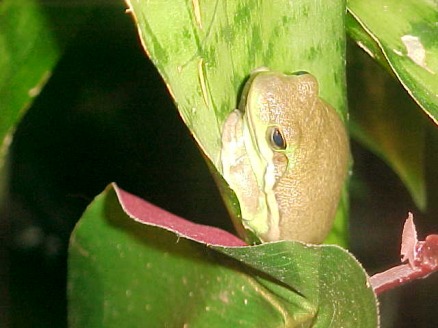 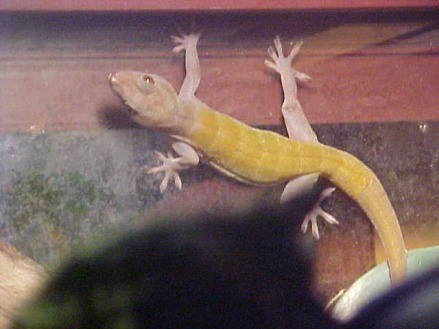 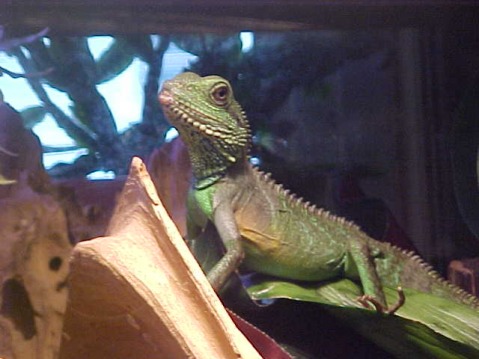 Fairy Dust has joined the Big Boys in this environment.  She has managed to gain an inch or 2 in body length since she was brought home.  Her body length would be comparable to the length of the male Rainbow skink, just a little smaller than Beck the Day Gecko.  She is beginning to show a good sized crest, so she is possibly a male, something I have always waffled back and forth about.  The chin colouring is also an indication.  We will have to wait a while longer to see.

She is doing very well with the change.  Better than I expected.  She is exploring, eating and basking, though a little flighty about other residents.  And she really doesn't know what to think of Dozer.  If she grows another 3 inches or so, I would consider moving her again, in with B&E, the smaller water dragon....dependant also on her being a her.  I tried this move when she first arrived but wasn't successful. 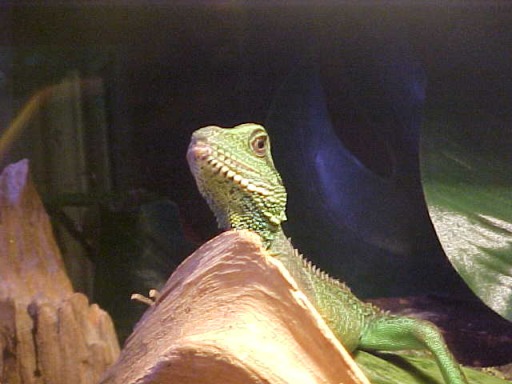 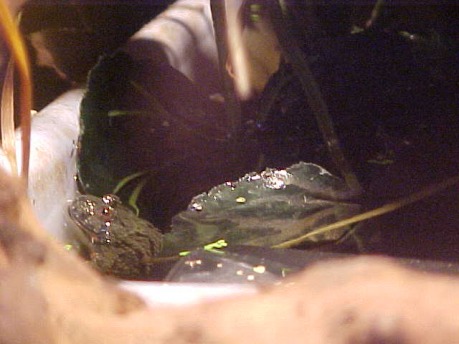 I noted no ill effects on the other animals in this environment in sharing the water with the fire bellies.   No one ever tried to eat them with the exception of a leopard frog.  Eventually the leopard frog ate them.  He is still with us 3 years later and doing well.  There was no noted signs of distress at the time he ate them. 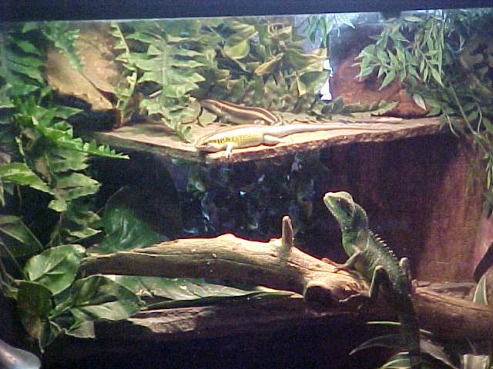 Excuse picture quality.  I wanted to show the size in relationship to the water dragon housed in here.    Above are the rainbow skinks.   A perfect miniature.  Whether the condition was inherited or due to husbandry lacking I will never know.  He is in the age range of 20 months or so.  Though I most definately lean on the lack of housing space. 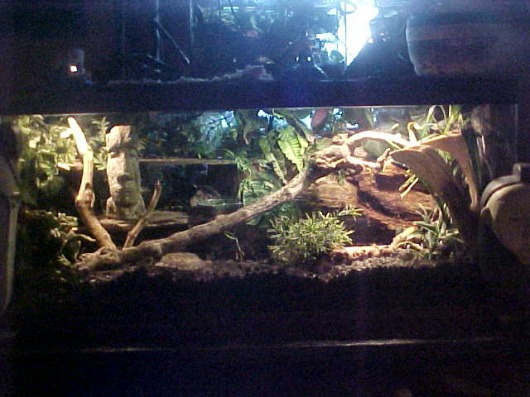 UPDATE ON THE COMPOSTING WORMS:  Tearing apart the far end of the vivarium from where the composting worms and their margarine container were, to increase the water area, confirmed the worms have populated the entire tank now.   I disturbed about 30% of the dirt and found approximately 50 worms. The wood turtle, water dragon and sometimes the skinks are eating them regularly.  Though I have not seen the frogs or toads eating them I believe they are.  I dumped the container and covered it with dirt.  The process has been fairly quick and has taken about 8 months to do.

To keep the colony going.  Bury a plastic container of scraps.  The container should have a few holes close to bottom.  Add new scraps periodically.